With attendance down does this mean VMworld has jumped the shark?

As I reported in my annual post on my experiences at VMworld, attendance was down this year and in a fairly big way. VMware reported attendance at 20,000 this year which is about a 15% decline from the 23,000 who attended in 2015 & 2016. Is this a sign that less people care about what VMware has to offer and have migrated to competing solutions or is there other reasons for the decline this year. I’ll throw out some theories on this but lets first look at what those number mean. 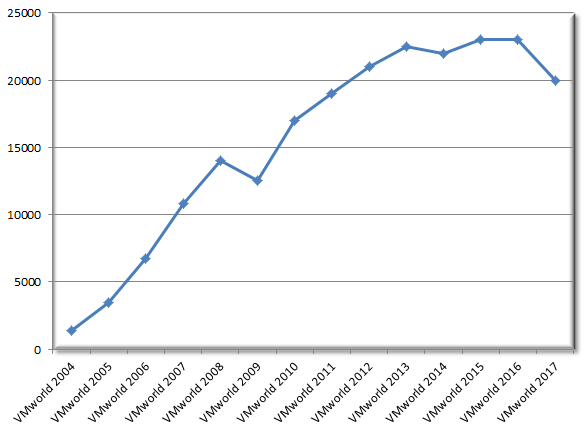 When VMware gives total attendee numbers for VMworld that includes several distinct groups of peoples which VMware tracks by the badge type issued for VMworld:

Now VMware has never shared the percentages of badge types that make up the total attendee numbers so without that insight it is difficult to know how much a decline occurred in each of those groups this year. Obviously the important one is the number of customers that attend the event as that is VMware’s core audience for VMworld. So why the decline this year, let’s look at a couple theories and the net result may very well be a combination of some of these.

Theory 1 – VMware sent less people to support the event this year. I’m guessing there are thousands of VMware employees that go to this event each year, perhaps VMware simply cut back on the number of internal people they approved for the event. As the event is in no longer in VMware’s back yard in the bay area, most VMware employees need travel expense to attend the event.

Theory 2 – Partners sent less people to support the event this year. I think every partner knows the importance of this event and has a presence at it but perhaps they cut back on staffing this year, I personally know on the HPE side we cut back a lot on the staff we sent this year. I’m guessing this group also consists of thousands of people at the event.

Theory 3 – Companies have tighter budgets and are tightening belts, travel is often the first thing to get cut when this happens. This can impact many groups including customers, partners and VMware itself. I know as a customer justifying attending these events can be a challenge as companies often see these as paid vacations for employees and don’t understand the true value of attending the events.

Theory 4 – More people feel they can experience the event from home. VMware does offer a lot of ways for anyone to experience the event remotely and as a result maybe some people feel they can get what they need from the event without attending it. I had one person reach out to me with a theory that since VMware released all the sessions from VMworld for free last year right after the event this might have resulted in less people attending since they thought they could enjoy all the session content again this year without attending. Notice that VMware hasn’t released the majority of the sessions to the public this year, just a select group of 40 of them.

Theory 5 – Hurricane Harvey disrupting travel. Again I know personally of at least 4 people at my company that were stuck in Houston as Harvey hit right before the event and couldn’t attend VMworld as a result. As Houston is the 4th largest city in the US I’m guessing there were at least hundreds of people that had to cancel their plans to attend VMworld because of Harvey.

Theory 6 – (thanks Christian for suggesting) VMworld EMEA was only 2 weeks after VMworld US instead of being spaced over a month apart as it has been in the past. This may have resulted in some attendees that typically go to both events only attending EMEA and the EMEA event cannibalizing some potential US attendees. The attendance at the EMEA event was up this year.

Again I can see a couple of these theories having an impact on attendance this year, does this mean that this is the new norm for VMworld attendance and VMworld has jumped the shark? Will it decline further next year? Personally I think this year was kind of a fluke like back in 2009 and I fully expect VMworld to be back at the 22K-23K attendance mark next year. VMworld still provides a ton of value for customers, partners and VMware employees to all converge in person and learn from each other. VMware is also expanding their presence, forming new partnerships and touching many other key areas in the IT world so it makes for a larger pool of potential attendees to come to VMworld. Only time will tell though, we’ll see what happens next year but I’m confident in predicting that we will see more people attending VMworld next year, I know I’ll be there and I hope to see you there as  well.