Face-off: Is VMware Tools worth the virtual security risks?

VMware Tools are an optional set of drivers and utilities that improve the performance and manageability of virtual machines. But there’s a debate about whether the benefits of installing VMware Tools outweigh the potential virtual security risks that it introduces.

On one hand, VMware Tools replaces many of the guest operating system drivers that were designed for physical hardware. These optimized drivers can drastically improve performance and functionality (e.g., providing copy-and-paste capabilities between the host and VM). But the installation of VMware Tools also adds potential virtual security vulnerabilities to an otherwise secure infrastructure.

In this face-off, two experts debate the merits of running VMware Tools.

The iPad is becoming more and more popular in the enterprise, and not just for mobile workers. There is also a slew of iPad applications for VMware admins.

Many IT vendors see the iPad’s potential and are developing iPad apps that can manage their traditional hardware and software products. Xsigo Systems, for instance, has a very nice app called Xsigo XMS , which manages virtual I/O through the company’s XMS servers. There is also an iPad application called SiMU Pro that manages Cisco Systems Inc.’s Unified Computing System.

II. Applications for remotely connecting to hosts and workstations

I. TOP IPAD APPLICATIONS FOR VMWARE MONITORING AND MAINTENANCE
With the top iPad applications for infrastructure management, VMware admins can control basic functions, such as powering virtual machines (VMs) on and off and using vMotion.

These iPad apps mimic some of the functionality of the vSphere Client and service console, but they aren’t a full-fledge replacement. Even so, these iPad applications allow VMware admins to perform key virtualization tasks without a full-scale computer.

VMware has released the Licensing Advisor tool that I talked about in this post for you to download and run in your environment to see how it complies with the new licensing model in vSphere 5. The download link and FAQ for the tool are available on VMware’s website.

VMware has a change of heart on licensing

When VMware announced the new licensing model based on vRAM when they revealed vSphere 5 the ensueing uproar overshadowed all the great features and enhancements that are part of vSphere 5. In fact if you look at my vSphere 5 link collection you will see that there are more links about licensing then there are about everything non-licensing related in vSphere 5. There was also a thread started in the VMTN forums on licensing and it is currently 87 pages long.

Well VMware heard you loud & clear and is changing the licensing model in a manner that should make almost everyone happy. I was fortunate to be on a pre-briefing call with VMware on the licensing changes and one of the points I brought up to VMware was how could you not of expected this reaction. If they had consulted with customers, vExperts and some other key people they could of seen what the reaction was going to be like and not be in the position they are in today. VMware said they kept this mostly internal which was not a good idea when making changes that would have a big impact on customers. VMware had calculated that only a very small percentage of there customers would be affected by this. I asked them how did you calculate this and what percentage of your customers did you get this information from. They responded that they use information obtained from logs that are sent in when support requests are opened and vm-support bundles are typically sent in which documents a persons environment.

To VMware’s credit they listen to their customers though, many other companies would just go ahead with the changes regardless of how customers felt about them. While VMware didn’t directly respond to the 87 page forum thread they did read every single post in it to see what customers were saying about the licensing changes. So the end result is VMware addressed some of the key concerns that customers were making with licensing. Here is a summary of feedback that VMware obtained from customers & partners:

So VMware responded to each of these concerns to licensing in vSphere 5 as follows: 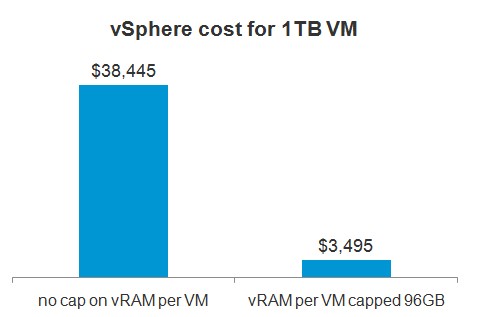 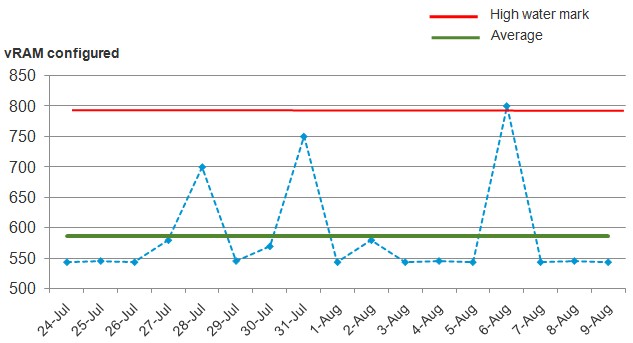 One other question I had for VMware was whether they have to modify the vSphere 5 RC code now before it goes GA to update it with these new licensing changes. My main concern was the hard limits imposed on the Essentials and free edition of ESXi. VMware responded that they have actually not applied any hard limits to the code yet so the GA version of vSphere 5 will not enforce any hard limits at all. This will be considered a bug and will be resolved in the next update of vSphere 5.

To make it easier for customers to see how the licensing changes will affect their existing environments VMware is releasing a vSphere Licensing Advisor Tool. It is an application that can be installed on any Windows computer that connects to vCenter Server and collects information about your environment. The information gathered is a point in time picture of vRAM usage, you can exit the tool and re-run it if you want to get updated vRAM usage numbers. The tool maps editions to the vSphere 5 equivalent edition using standard entitlement paths. It does not capture information on Linked Mode and instead calculates pools as if all vCenter Servers are linked together. The tool also caps the amount of per VM vRAM usage at 96GB. The results of the tool can be exported to a CSV file so data can be more easily viewed. Here are some screen shots of the tool in action: 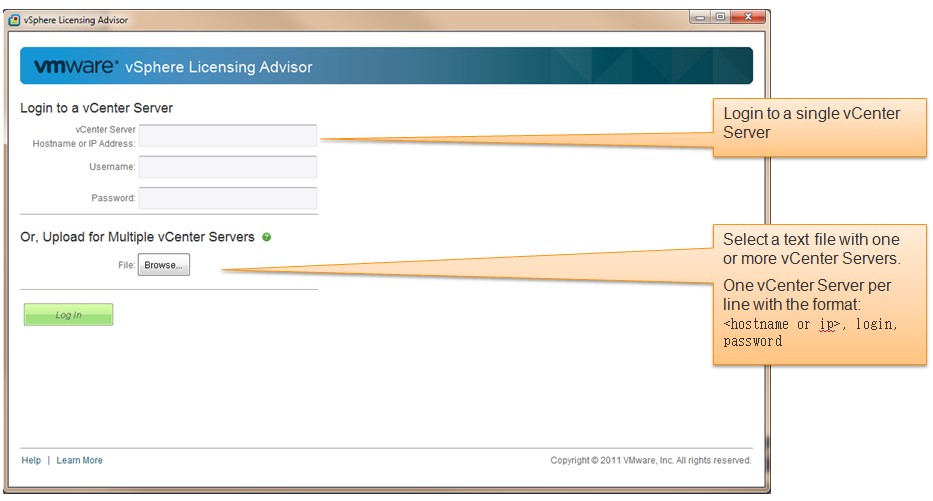 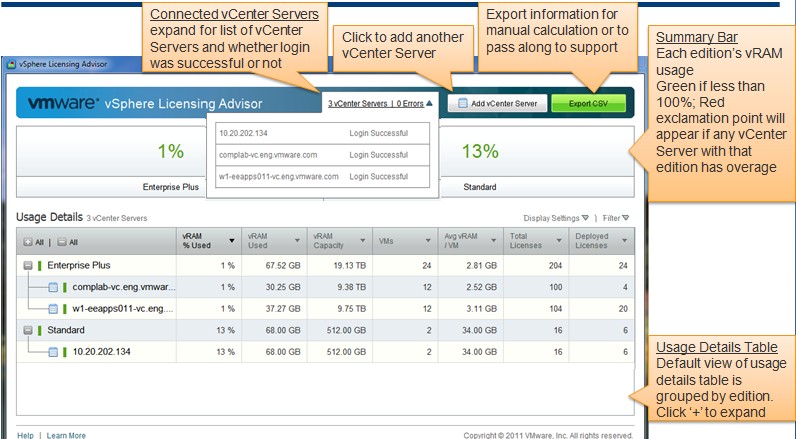 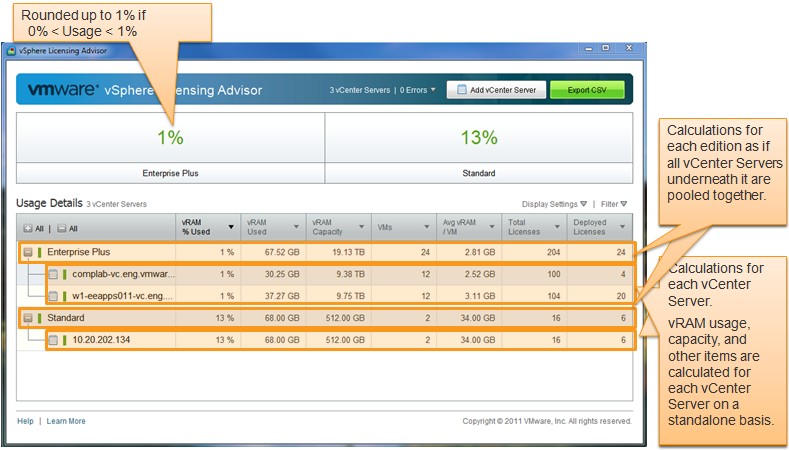 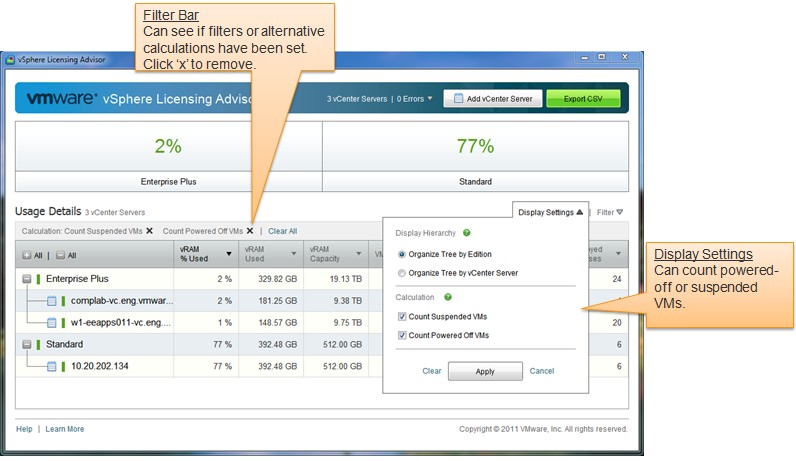 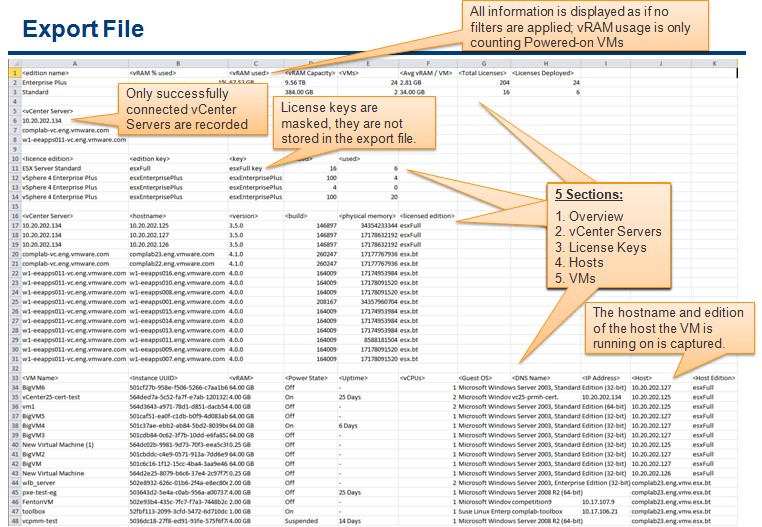 So there you have it VMware heard you loud & clear and did what was needed to fix the mess they created. I hope you understand VMware had to do something to change the licensing model because the socket model just doesn’t work anymore with the way core counts keep increasing. It would of been nice if they had implemented these new changes originally so the reception to the vSphere 5 announcement focused on the features and not the licensing but what is done is done, VMware fixed it and now its time to move on. I really have to give them a lot of credit for so quickly responding to customer feedback and trying to make things right with their customers. While there are some that may still not like the new licensing model, it’s definitely better than before and since it is here to stay its time to start getting used to it. So lets start getting excited about the features in vSphere 5 and not fixate on licensing anymore. This promises to be another great release from VMware that makes an already great product even better.