Mr. Sloof and VMworld TV is back in action at VMworld EMEA

The VMworld TV crew featuring the notorious blogger Eric Sloof along with his sidekick Jeremy van Doorn were notably missing this year from VMworld in the US. I always enjoyed watching Mr. Sloof in action at VMworld recording video footage and interviews all over the event and producing daily wrap-up videos, so it was disappointing that VMware didn’t bring them to the US event this year. However they were back in action at VMworld EMEA and if you want to get a great summary of what went on over there along with some good interviews be sure and check out the videos on the VMworld YouTube channel. I’ve listed some of them below along with some additional videos from VMworld EMEA that seemed interesting.

VMware has released approximately 50 VMworld 2015 sessions for free but you’re still missing out on tons of other great sessions that are only available to paid attendees. Well now you can get access to all those great recordings for the relatively low price of $200 by purchasing a VMUG Advantage membership. The price of $200 is way cheaper than attending VMworld plus you get a lot of other great benefits that come with VMUG Advantage which include:

All for $200 which is a damn good deal considering the cost of going to VMworld which is thousands of dollars, combined with all the other great stuff you getting it would probably total over $5000.

So head on over and sign-up so you can get started listening to all the great VMworld 2015 session content that is available,

Primary Data conducted a survey of VMworld attendees to find out the level of interest in VMware Virtual Volumes (VVols) as well as what are the challenges and concerns that are keeping people from adopting it. The survey had 355 responses which is a good sampling that  probably represents the viewpoints of the majority of VMware customers. The overall results of the survey show strong interest in VVols but also the key challenges that are holding people back from using it.

When asked about the level of involvement of VVols, 41% of respondents were discussing it but 28% had never heard of it. In addition, 12% were not pursuing VVols and had no plans to but 7% have already implemented it and 4% are in the process of implementing it. The remaining 4% were testing VVols.

So lets look at these numbers and what they could mean:

These numbers are pretty much in line with what I’ve seen and heard. When I’ve presented at VMUGs and VMworld this year I always ask how many people have heard of VVols and I see more than half the hands go up, when I ask who understands VVols I see much less hands and when I ask who has implemented I see very few hands.

I previously did a long detailed post on my thoughts around VVols adoption and reasons why people should adopt now and why they should wait. I think the biggest barriers right now are VVols being a 1.0 release, lack of replication support, lack of understanding what it is, the vSphere 6 requirement and lack of array support. If you look at the 1.0 release of VSAN it was the same way, because of limitations, lack of understanding and what not there was not large scale adoption, this is pretty much true of any 1.0 product. I don’t expect to see the implementing percentage for VVols go a lot higher for at least a year until it matures and the SAN vendors catch up.

Now lets look at the challenges around VVols adoption that were highlighted in the survey and what they could mean:

You can see most of the challenges seem to focus more on existing storage issues in customer environments not related to VVols. The survey does a good job of highlighting the many issues that customers have with storage in their environments, particularly around performance and availability. Lack of expertise and lack of array support seem to be the biggest VVol challenges related to adoption which will simply take time to overcome. You can see the full survey results and raw data at this link.

Win a Home Lab that you can fit in your pocket

Well you might not be able to fit it all in your pocket but at least the server will fit. Turbonomic is giving away a TurboStack Home Lab and all you have to do for a chance to win is watch a video. 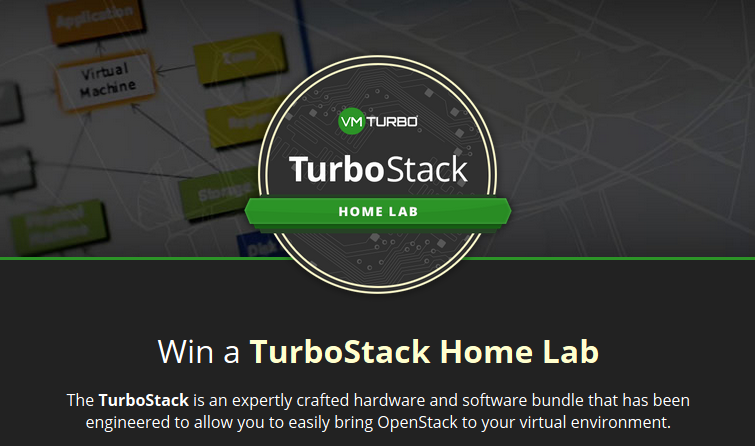 The TurboStack was created to enable you to experiment with OpenStack safely in your own home lab. Leveraging the OpenStack Juno build, the TurboStack also includes a full NFR License to Turbonomic 5.2. Every TurboStack Home Lab is individually assembled by a VMTurbo engineer and includes:

Now a NUC isn’t some sort of an Eskimo computer, it stands for Next Unit of Computing and is a little powerhouse of hardware packed into a very small footprint. The Intel NUC measures about 4.5 inches in height and width and just 1.25 inches in height, you literally could slip it into your pocket.

Despite it’s very small form factor the Intel NUC5i5RYK comes with an Intel I5-5250U processor with dual-cores running up to 2.7Ghz in Turbo mode. It supports up to 16GB of RAM using DDR3L SODIMMs and supports a M.2 Key Type M SSD card for storage. It comes with a wired 1Gb network port and also supports wireless 802.11AC. For connectivity it has the following ports: Mini-HDMI, Mini-DisplayPort, headphone/microphone and 4 – USB 3.0 ports.

Along with the NUC you get some great shared storage with the Synology DS-415 that supports iSCSI, NFS and a lot of other connectivity options, you also get a nice Cisco SG300 10-port Gigabit Managed Switch to tie it all together. So how do you win this awesome combo, it’s easy as 1-2-3:

Not only do you get to learn about a great management product for your vSphere environment but you could also walk away with a great home lab to learn more about OpenStack.

At VMworld this year VMware announced that next year VMworld will be going back to Vegas next year but not at it’s usual location of The Venetian/Palazzo & the Sands Expo Center, but instead at Mandalay Bay. This change was made because the Moscone Center is under-going renovations next year, so for whatever reasons (i.e. costs, availability) it will be held at Mandalay Bay instead of the Venetian.

While not as large as the Sands Expo Center, the Mandalay Bay Convention Center dwarfs Moscone as well with over 1.7 million square feet of space available and a 577,000 square foot exhibition hall. Mandalay Bay also contains around 4,700 hotel rooms with the adjacent Mandalay Bay, Four Seasons and THEhotel hotels. There are also enclosed walkways and trams that connect it to the Luxor (4,400 rooms) and Excalibur (4,000 rooms) hotels along with many other nearby hotels. 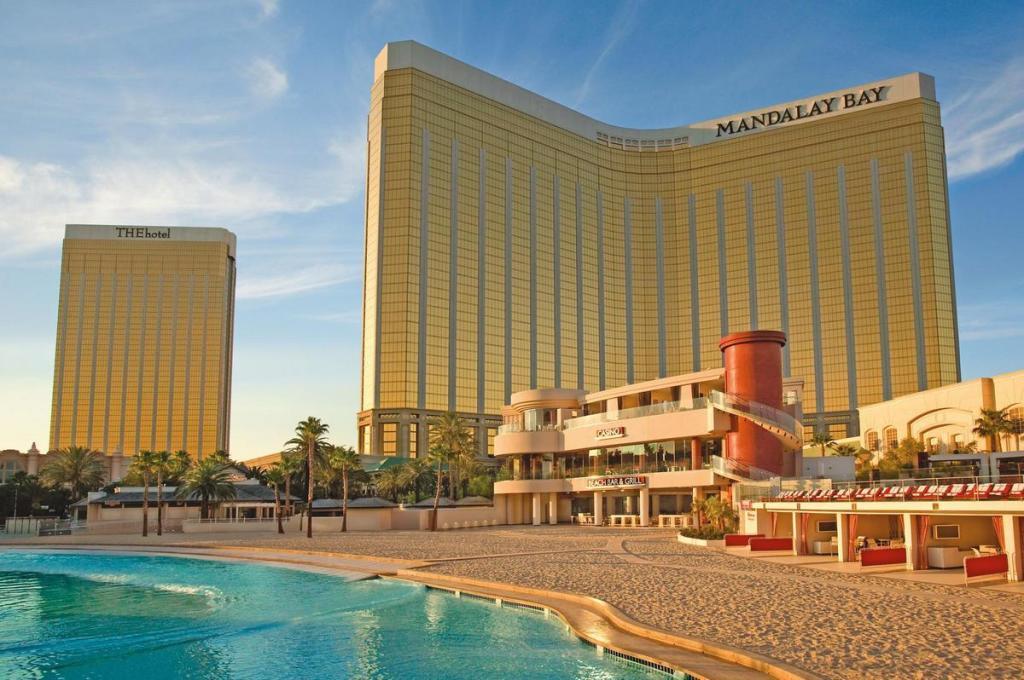 So VMworld next year will definitely have plenty of space to stretch out in, I was at the Mandalay Bay in 2013 when VMware Partner Exchange was held there and it’s a nice facility. The rooms might not be as nice as the Venetian/Palazzo suites but it’s not bad and you can get more upscale rooms at attached THEhotel.

I think a nice side effect of VMworld going back to Vegas is that more people will likely attend as it’s much more affordable and accessible than San Francisco is especially without the insane hotel prices. There will also be much less walking all over the place and more available space should allow for more exhibitors and more sessions.

VMware has a VMworld 2016 pre-registration page up now where you can put in your info to be notified as soon as registration opens next year. So go sign up and see you in Vegas baby!

I previously wrote on how you could access the VMworld sessions via the Mobile App on a smartphone or tablet or via a PC through Schedule Builder. However those methods only allowed you to stream the content, not save it for offline viewing. Some people prefer the download method so they can copy it to a device for offline playback or just save their favorite sessions on their PC. Well that’s all changed as VMware has updated their VMworld page so you can now access the sessions through their main session playback page and either watch them or download them.

Don’t go to this page from the main VMworld page, it looks like an old page and doesn’t have the 2015 sessions yet. You have to click on US conference and then click the session playback link all the way at the bottom of the page which brings you to the page with the 2015 sessions added to it. Click the link and it asks you to verify that you were a paid attendee by putting in your name and email address, that seems odd as you would expect to login with your vmworld.com credentials instead. I tested this out and all it is really looking for is that your email address matches what you registered for VMworld with, I put in a different name and it still took it. 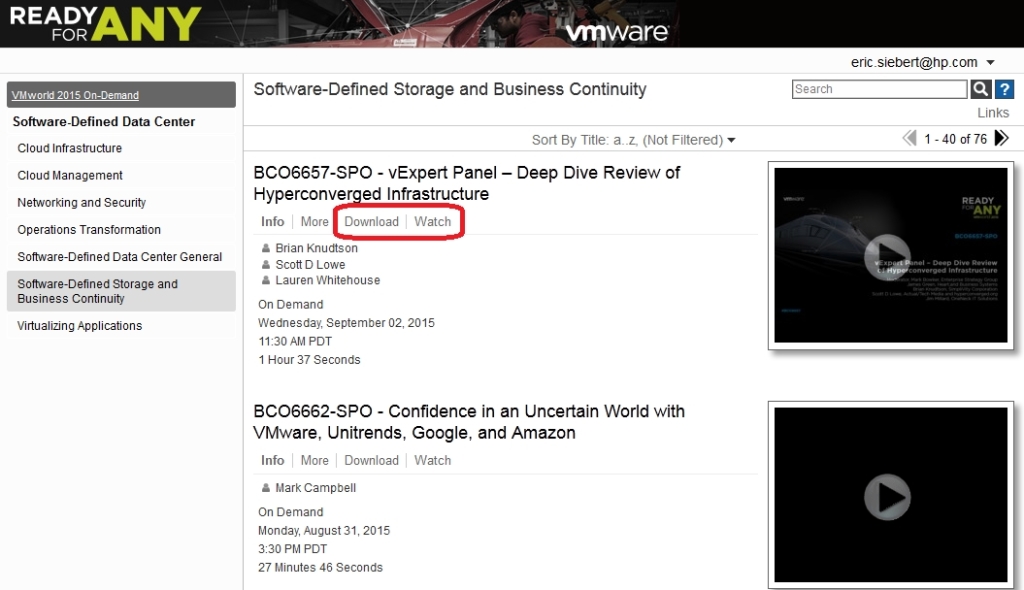 The size of these .zip files varies from around 250MB – 500MB depending on if it has video or not (just slides). Once downloaded you can extract the zip file which creates a bunch of files and folders, to start watching the session you can click the default.html file which will launch the playback in a browser using Silverlight or an alternate method (i.e. flash, java). Alternately you can go into the content sub-directory and launch the .mp4 video using your video player of choice.