Pete Flecha from VMware and I just finished recording a webinar on VVols where we discuss challenges with external storage, the benefits of VVols along with the latest adoption trends and ecosystem readiness. If you are on the fence about VVols or just want to learn more about it be sure and check it out.

VMware VVols Today: Part 1 – What VMware has delivered so far

This is a multi-part series covering various aspects of VMware Virtual Volumes (VVols) from support to adoption to benefits to predictions and more. In part 1 we’ll take a look at what VMware has delivered so far with VVols and the VASA specification.

In the first part of this series on VVols let’s do a brief history of the timeline for VMware’s development of VVols:

From this timeline we can see that VMware has been working on the development of VVols for over 7 years and it has been part of vSphere for almost 4 years. That’s a pretty long time but what’s important to note is it’s been a bit of a work in progress as VVols required massive engineering on VMware’s part, to get VVols to work VMware had to request changes to the SCSI T10 specifications and also filed patents on the new architecture.

vSphere 6.7 further enhanced VVols in small ways and today VVols is pretty rock solid from VMware’s side. Now it’s really on the partners to build out their solutions for VVols, the only barriers that exist today for partners to do whatever they want with VVols are their engineering resources. As VVols represented a massive engineering feat from VMware the same is equally true for partners as well. VVols represents a fundamental change in how storage arrays interact with vSphere and the greatly increased number of objects that a storage array needs to support for VVols. As a result this put a pretty hefty burden on partners to engineer their arrays to support this new architecture.

So what’s next for VVols? As I mentioned VMware is mostly done with the current VASA spec for VVols and there are no longer any limitations or barriers for partners to build solutions. It may seem like VMware isn’t doing that much further development with VVols today but that’s simply not true. While VMware is waiting for partners to play catch up, I have seen the VVols roadmap going forward and there is plenty on it to optimize and enhance VVols further and support some newer storage technologies. I also know that VMware has even beefed up their VVols engineering team.

I feel that VVols is in a very good place today and VMware has done a great job to get to this point as this was no easy feat and represents almost a decade of work on their part. VVols has a bright future ahead of it and at some point I would expect that VMFS will eventually go away much like the old ESX hypervisor did when it was replaced by ESXi. The burden is mostly on partners at this point but continue to look for further refinements from VMware going forward as storage policy based management becomes the de facto standard in the virtual data center. 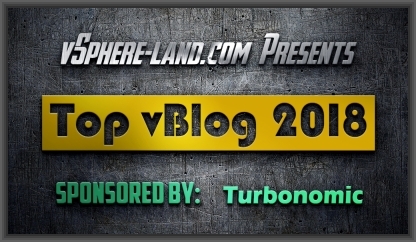 It’s that time of year again, well a little later then usual. My annual Top vBlog contest just kicked off and anyone can vote on their favorite VMware & virtualization blogs through 12/15. I first want to introduce our awesome official sponsor of Top vBlog 2018 which is Turbonomic again this year, also special thanks to Nutanix for helping out as well

Last year I added some additional scoring criteria and I believe those worked out well to help better define the Top vBlogs. The total points that a blog can accumulate will be based on 3 factors:

These factors combined make up the total points a blog can score and determines how they end up ranked in the final results. Some other changes and rules this year:

So please go vote and show the bloggers your appreciation for the hard work they do!

After a slight delay, voting for Top vBlog 2018 is now open! The number of blogs devoted to VMware and virtualization continues to stay at an amazingly high level, this year there are again almost 300 of them on the ballot. Here’s your chance to show your appreciation to the bloggers for all their hard work by picking your favorites which will determine the Top vBlogs for 2018. Last year over 1,600 people voted from all over the world and when the votes were tallied the top 25 bloggers were revealed. Now it’s time to do it all over again as new blogs are born and old blogs fade away and bloggers move up and down the rankings. When casting your votes please keep the following in mind about the blogs.

Of course all this is made possible by Turbonomic who is the official sponsor for Top vBlog 2018!

Over 200 people took the vQuiz to test their knowledge on how well they know the history of VMware through a series of 20 timed questions. I made the questions fairly challenging and I didn’t expect to see any person get all 20 questions correct and that was mostly the case. In fact I may have made it a bit too challenging as more than half the people who took the quiz got 10 or less answers correct. There was one very obscure question in particular that I was confident almost nobody would get correct. Below are the results and answers of the quiz to help educate everyone on history of VMware. Scroll down to the end to see the people who scored the highest and won the Amazon gift cards.

All future quiz’s will have sponsors and better prizes, if you are interested in sponsoring a themed vQuiz (i.e. storage, performance, VVols, cloud, backups, etc…) reach out to me and let me know. Sponsored quiz’s will feature a mix of general questions specific to the topic and some related to the sponsor.

Winners of the vQuiz: