Once again VMware Partner Exchange (PEX) will be held in San Francisco and registration is open for the event which is being held on Feb. 2-5 at Moscone West. As the name applies this is not a customer event and attendees at PEX are made up of a mix of VMware partners and resellers. PEX is essentially a scaled down VMworld with breakout sessions, keynotes, labs, solutions area, etc. with the focus more on training resellers on how to sell VMware and partner products to customers. Attendance is usually around 5,000 people.

The call for papers for PEX is internal to VMware only and almost all the sessions are from VMware speakers with the exception of a handful of partner sessions that they receive with sponsorship (generally 1 per partner for highest level sponsorships). In addition VMware holds special Boot Camps that are usually an all-day event on a specific topic, this is a great form of live training. Select partners also receive a Boot Camp as part of their sponsorship of the event. The Boot Camps are being held Jan. 31-Feb. 2.

Last year there was a bit of drama around PEX as VMware told both Veeam and Nutanix that they were not welcome at PEX. Veeam came anyway and ended up setting up shop nearby and tried to route customers to their camp and events. It will be interesting to see what happens this year as VMware continues to compete more and more with pretty much all of their partners.

The cost of PEX registration is cheaper than VMworld at $1,495. there is an early-bird registration discount (good to 12/9) that lets you save $300, if you are an alumni they also take off another $100. This year the event is a week earlier and as a result it conflicts with the  Big Game which will be sure to cause problems with peoples travel plans. As the Big Game is in my city (Phoenix) this year I haven’t decided if I want to try and fly out very late Sunday/very early Monday after the Big Game or early Sunday before the Big Game to make sure I can watch it.

The content catalog also just went live for PEX, right now only the VMware sessions are listed (130 of them) and very few Boot Camps. Expect to see it become more populated as it gets closer to the show. The Storage track only has 11 sessions with 2 on VVols and 4 on VSAN. The official Welcome Reception kicks off Monday (Feb. 2) from 5:00-7:00pm, you can see the full agenda here.

I’ll be attending PEX again this year so if you’re going I hope to see you there.

Nominations for Season 7 of the vExpert program now open

The VMware vExpert program was born back in 2009 thanks to the efforts of John Troyer to help recognize members of the VMware community that continually give back by sharing their knowledge and experience with others. The original group was about 300 members which included myself and was mostly compromised of bloggers and VMUG leaders. The group has expanded over the years as both the number of bloggers has grown and the criteria and requirements have changed. I believe in the last year they are up to around 700 vExperts.

I think it’s important for people to understand the definition of a vExpert, I did a post on it for Tech Target back in 2009 on what it means to be a vExpert. First off the vExpert title is not an official certification and it is only good for one year, so if you don’t stay active you could lose it as you have to nominate your self each year. The name vExpert is a bit mis-leading as it doesn’t really certify that you are an expert on VMware technologies like a VCP or VCDX certification does. Think of the vExpert title as a recognition award from VMware that validates your contributions to the VMware community. What you get from it is recognition and some other great perks like VMware licenses, beta program access, exclusive early access webinars, special events and more. Some vendors will also reward vExperts with special giveaways like this great shirt from Tintri which includes a star for the number of years that you were recognized as a vExpert.. 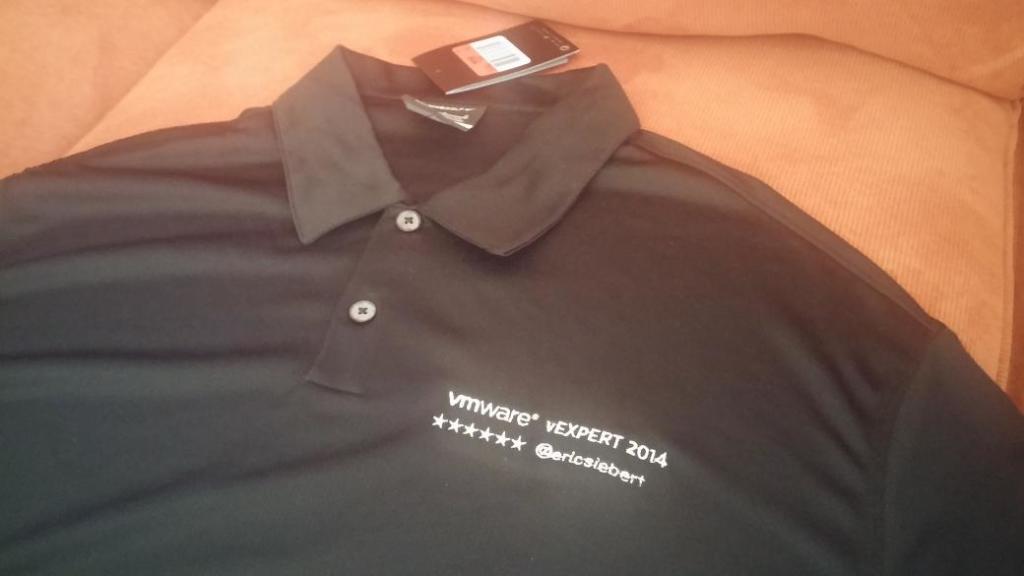 So what does it take to become a vExpert? First off, understand it’s not a popularity contest. You can read the blog post here on the paths to vExpert and some of the characteristics that they look for. If I had to summarize it in a few words it might look like this: passion, leaders, bloggers, enthusiasts, sharing, champion, speaker, evangelist, commitment. So want to become a vExpert? All it takes is getting involved with the community and staying committed to it, there are a lot of different ways to do this. You can start a blog, become a VMUG leader, do a podcast, speak at events, be active in the VMTN community, be social and more. I did a presentation at VMworld back in 2011 on how to succeed at blogging and becoming a vExpert that you might find helpful. Remember it takes time and dedication so stick with it and once your contributions build up don’t be afraid to apply. If you’ve already made contributions in 2014 be sure and apply and detail them for consideration to become a vExpert in 2015.