Time for you to pick the top VMware & virtualization related blog websites. The last vote was in June 2009 and there have been many great new bloggers since then that are worthy candidates for the top bloggers. Since there are so many top blogs I’ve decided to expand the top 20 blogs to the top 25 blogs and you get to pick the winners. Voting will open on Monday, Jan. 4th and I’m using a better survey tool this time. Because of the cost I’ve gotten a sponsor for the voting, TrainSignal has graciously signed on to sponsor the voting and as an added bonus they they are providing two copies of their awesome vSphere DVD training course that will be awarded to two random voters. The voting will be to pick your top 10 favorite blogs, I will then count and weigh the votes to determine the complete top 25 list. The top 10 blogs will receive a nice graphic that they can display on their website. Stay tuned for details on the voting!

Giving back to someone who deserves it

My secret project for the last month was putting together a gift for someone who would give you the shirt off his back if you asked for it. That someone is John Troyer from VMware who helps out bloggers, vExperts and the VMware community on a daily basis without asking anything in return. John has helped me out personally many a time doing things like writing the foreword to my book, getting a question answered by VMware engineers or getting me access to a beta program. I had planned on getting John a little gift for a while now as a token of my appreciation for all the help he has given me and with the holidays approaching I thought it was time to do it.

After thinking about it for a while I thought I would extend this to other people in the VMware community who know and deal with John and have also been affected by his generosity. I had to keep it a secret so John wouldn’t find out so I put together an email list of about 50 bloggers & vExperts who might want to contribute. The plan was to collect a small donation from anyone who wished to contribute which I would use to get John a gift with. I also had planned on getting him an appreciation plaque as well but after doing some research found an online group card that everyone could sign and add their own personal message to.

The response was overwhelmingly positive as everyone thought John definitely deserved this. As a result we were able to send John several gift cards and printed copies of the online group card that everyone had signed. In addition Chad Sakac from EMC kicked in with an Iomega storage unit for him as well. So thanks John for everything you do for us, I’m sure you already know we appreciate it but sometimes its nice to get a reminder of it anyway. 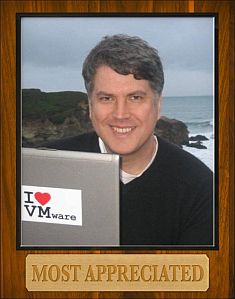