Why would you want your own vSphere lab in the first place, if you read my book I have a whole chapter on it (actually Simon did that chapter), here’s why:

So want your own vSphere lab but maybe are short on funds, no problem, Unitrends has you covered. Unitrends is giving away a complete vSphere dream lab that has all the hardware and software you’ll need to get up and running with vSphere and start cranking out your own VMs. How do you get your chance win this complete vSphere dream lab, it’s pretty simple, just head on over to there website and check out Unitrends Enterprise Backup. 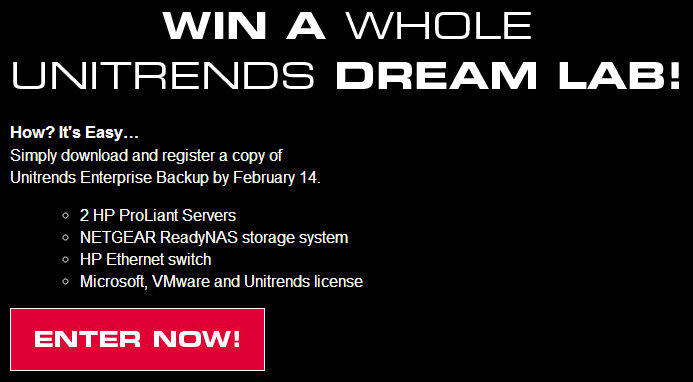 The vSphere dream lab consists of 2 HP servers, HP network switch, NetGear ReadyNAS and the VMware, Microsoft & Unitrends software you need to get everything up and running. I was able to find out some more detail on the hardware specifications:

All in all a nice sweet lab setup, the contest runs from now until Feb. 14th so you have plenty of time to head over there and download and register your copy of Unitrends Enterprise Backup and enter for your chance to win. If if you want to know more about home vSphere labs be sure and check out my massive home labs link collection.

How to succeed at blogging, writing and being a vExpert

John Troyer asked me to present to the vExperts at VMworld 2011 and talk about my experiences with blogging and writing. I meant to post this a long time ago and forgot, I recently came across the presentation that I made for that event so here it is.

Giving thanks for virtualization 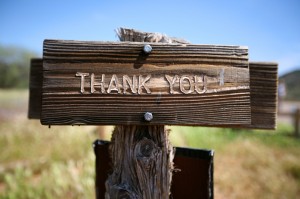 For many, many years, my job role was sort of a swiss army knife of server administration, I managed Windows servers, email servers, application servers, databases servers and much more. I wasn’t particularly passionate about any of the technology I worked with, to me it was simply a job and nothing more. Then about 7 years ago, along came virtualization, the company I worked for wanted to implement virtualization as part of a server refresh/consolidation project. My first experience with virtualization was with ESX 2.5, I was a bit skeptical at first about it, back then virtualization wasn’t anywhere near as mainstream as it is today. I even remember questioning the all your eggs in one basket approach because as a server admin, if that basket ever broke it would make a really big mess for me to clean up. As part of the preparation for the class I had taken a training class and it really opened my eyes to virtualization and was a technology that I found I actually really enjoyed working with. As a result I think for the first time in my life I had found technology that I could truly be passionate about.

For me, virtualization became a defining point in my life and helped launch a whole new career for me. I became very active in the VMTN forums as I really liked sharing my knowledge and experience with others and helping people out. I was so active I achieved Guru status in points (20,000+) in just under a year, despite having not really posted much in many years I’m still in the top 20 in points. I also became one of the early moderators with others such as Jason Boche, Thomas Bryant, Edward Haletky, Steve Beaver and Jase McCarty. The VMTN forums are also what got me started collecting VMware-related links, the same questions would typically come up over and over and rather than answer them in full each time I just posted links that I had collected to other posts that answered them. One day one of the other moderators said why don’t you post your collection of links so I did and from there I started vmware-land.com where I continually grew my link collection. The first iteration was using GoDaddy’s website tonight builder and was pretty crude and basic, from there I built my own site using FrontPage, it gave me more control over the formatting but was a pain in the butt to maintain, you can still see the original site here. I finally moved to WordPress which made things much easier, I still did a bunch of theme hacking though to customize it how I liked it. I also changed the name from vmware-land.com to vsphere-land.com when VMware made the big name change several years back. I still grow and grow my link collections each week, it’s pretty tedious and time-consuming work searching for and noting quality links and them getting them posted to the right categories.

Unknowingly, the VMTN forums also served as a stage for me to get noticed by others, I had one publisher contact me several years back as they noticed me in the VMTN forums about writing a book for them. I did the proposal for them, they liked it and made me an offer and strangely enough that same day another bigger publisher contacted me as well and made me an even better offer. That really launched my writing career, I had never really even thought about writing before but once I started it just seemed natural and I found that I enjoyed it. This lead to my writing my first book which took about 6 months to write, VMware VI3 Implementation & Administration, which unfortunately had bad timing as it was released the same month as vSphere was. Not to be discouraged by that I launched into my second book, Maximum vSphere, for that one I wanted to make the most of timing this time around and have it launch at VMworld. To accomplish that though I had to write the book in 2 months which I did (I got Simon Seagrave to help me on 2 chapters) and made it just in time to launch at the VMworld bookstore. I haven’t had the motivation to write another one yet, it’s a lot of work, you don’t make a lot of money writing tech books and because technology changes so much they have a short shelf life. Who knows maybe someday I’ll do another.

Around that time I also had Tech Target contact me about writing for them, I started writing for searchservervirtualization.com as a newbie writer back in 2008. I migrated to SearchVMware.com after they launched it and became one of the main writers there for many years until I joined HP. I also was noticed by other Tech Target sites and ended up writing for at least 8 other sites including searchstorage.com and searchdatabackup.com. Being an independent writer was fun, I was invited to events such as HP Discover, VMworld, Tech Field Day and more. I was even one of only four of bloggers that VMware flew into San Francisco for their private vSphere 5 launch event that was held in a small little event room and broadcast on the internet. Sometimes I think back and wonder if I enjoyed writing so much, why I didn’t start writing sooner. For me I think virtualization is what provided me the motivation and the spark I needed to ignite my writing career.

All in all I have a lot to be thankful for and I owe a lot of it to virtualization which has enabled me to be part of a huge community of fellow virtualization enthusiasts and meet a lot of great people from all over the world. Virtualization has provide me with a lot of great opportunities and has really given me a sense of direction, a passion, a purpose and a bright future. So when I sit in front of my turkey this Thanksgiving and think about what I’m thankful for, virtualization is near the top of that list. Thank you VMware for making such incredible software that ignites such passion in those that use it and building a community that brings millions across the world together to share in that passion.

Every year is an election year at vSphere-land! Voting for the annual virtualization top blog contest will begin in January, all blogs that are listed on my vLaunchpad will be put on the ballot. So if your blog isn’t there, now is the time to let me know about it. If I don’t know about your blog, you won’t be listed and you won’t be included in the voting. So head on over to my vLaunchpad and see if you’re listed and that your website URL and twitter/RSS links are correct. If you’re not on there use this form to let me know about it. Be sure and include your blog name & URL, your name and twitter/RSS links.

One thing to note is that I only keep active blogs listed on the vLaunchpad, so any blogs that have not had any new posts in over 6 months I remove from it. I just went through it and removed over 2 dozen stale blogs from it.

VMware’s annual partner conference which is called Partner Exchange (PEX) will be held at the end of February this year and for once a VMware event in Las Vegas will not be at the Venetian where VMworld’s and PEX’s have traditionally been held at in the past. This year PEX is going to be held at the Mandalay Bay hotel in February from Monday, the 25th to Thursday the 28th, the boot camps which are mostly day long events that vendors can put on will be held beforehand on the 23rd-25th.

VMware PEX as the name applies is only open to partners, this includes hardware and software vendors like HP, Veeam, Dell, etc. as well as VARs such as Varrow, it is not intended for customers. The scale of PEX compared to VMworld is much smaller as there are typically only around 4,000 attendees. It is still held in the general format as VMworld with sessions and a Solutions Exchange but on a much smaller scale. In fact the entire Solutions Exchange is held in the same size room as VMworld registration is typically held in which shows you how much smaller it is.

Last year was my first time attending PEX and it was definitely a more intimate crowd and without customers there you were able to network with fellow vendors and partners much easier. If you’re a vExpert there are also special activities for you and last year there was even special signs scattered around acknowledging those part of that elite group. You may not got out of it as much as you do with VMworld but if you’re a partner it’s definitely worth attending. Registration for PEX is not yet open but you can sign-up to be notified when you are able to register. Be sure and checkout VMware’s PEX webpage for more information and look forward to seeing you there.