It’s been a while since I last reported on the customer telemetry data that we capture to track VVol adoption with 3PAR customers and wanted to provide an update. Before I share that I want to relay what I’ve seen and heard around VVols adoption in general.

VVols adoption is trending upward, our data confirms this and VMware confirms this as well. VMware can track some basic VVol stats via their vCenter analyst cloud functionality and the data I’ve seen that was shared to me by VMware definitely shows VVol adoption trending upwards. Adoption seems to trending up faster in the last year based on several factors:

Now before you get excited when I say trending upward there is still a very small percentage of the VMware install base currently using VVols, VMware estimates around 2%. However the usage trends have sharply up-ticked in the last year compared to the year and a half prior to that since the initial VVols release when adoption was almost non-existent. I fully expect that to continue to accelerate going forward as more customers start using it. So while adoption is on the rise which is a good sign I realistically don’t expect it to reach the tipping point of being the majority of what customers use (>50%) for several years.

As far as the development of VVols goes from a VMware perspective the VASA specification is basically feature complete. The roadmap for VVols is mostly minor enhancements and a lot of the under the covers optimization and support for things like in-band binding. Some of the other VMware product teams have some work to do to improve VVols support (-cough- SRM -cough-) but for the most part VVols is done. Partners have everything they need to build out their VVols solutions however they see fit based on the VASA framework and that really is the main inhibitor to VVols adoption, partner readiness with their VVols support.

So now on to the tracking data on 3PAR, this is an update since my last post on VVols adoption in January 2017 and a comparison from January 2016 to September 2017.

As you can see from Jan. 2017 to Sept. 2017 VVols adoption has picked up and their are a good number of customers running it full scale (100+ VVols) in their environments. There also are some pretty significant size VVol deployments which is encouraging to see as the benefits that VVols provides are amplified the larger your vSphere environment is. I’ll be anxious to see what the data looks like 6 months from now as VVol adoption is only going to drive upward, however at what pace is yet to be seen. As partners continue to improve their VVol feature support and increase scalability it will help accelerate adoption going forward. The future for VVols looks bright and I look forward to the day when VMware finally retires VMFS and storage management is all policy based.

To learn more about VVols here our a few recent posts I did on various VVols topics:

I ran across this recent article in the SF Business Times and thought I would share it along with my thoughts. The article highlights VMware’s CEO Pat Gelsinger as one of the most admired CEO’s and how he helped right the VMware ship adrift in stormy seas during his tenure. You can read the article yourself but I thought I would share a few highlights from the article and a bit of Pat’s background I found out through my own research:

From my viewpoint I can’t think of a better person to lead VMware into the future, VMware has adapted to the ever changing IT landscape pretty well and it’s a testament to their leadership that they have made the changes necessary to stay relevant. It’s fairly unusual to have a CEO of a big company that has a deep technical background, many CEO’s are more your stereotypical executive business types. I think Pat’s management style of being a blue collar CEO who is very hands-on and deeply entrenched in the software that VMware develops is part of the reason they continue to be successful at what they do.

It’s readily apparent that he is very passionate and intense about what he does and his success over the years rising all the way to the top position at VMware is a testament to all his hard work and strong faith that made it possible. One of my favorite stories of his and how he was first introduced to VMware, he and Mendel Rosenblum (VMware co-founder) were back stage at a Intel developer conference the day after the very first vMotion and how Mendel was so excited and they sat there brainstorming use cases for it.

On a personal note I’ve met Pat several times at VMworld, mainly at vExpert events were he has appeared at. He is easily approachable, willing to talk to anyone, very laid-back and obviously a geek at heart like myself. I really like his casual, easy-going approach to things even in keynotes which is in sharp contrast to Paul Maritz who seemed very stiff and formal. His humanitarian work is truly inspiring as it shows he truly cares about those that are less fortunate. In one week he went from the main stage at VMworld 2017 speaking to thousands about technology to Kenya to help children and families in need.

I’ve always admired Pat Gelsinger, he’s a brilliant technologist, a wonderful leader, and an incredible person and VMware is very lucky to have him at the helm. Thanks Pat for all you do for the virtualization community and for the entire world, you are an inspiration to us all. 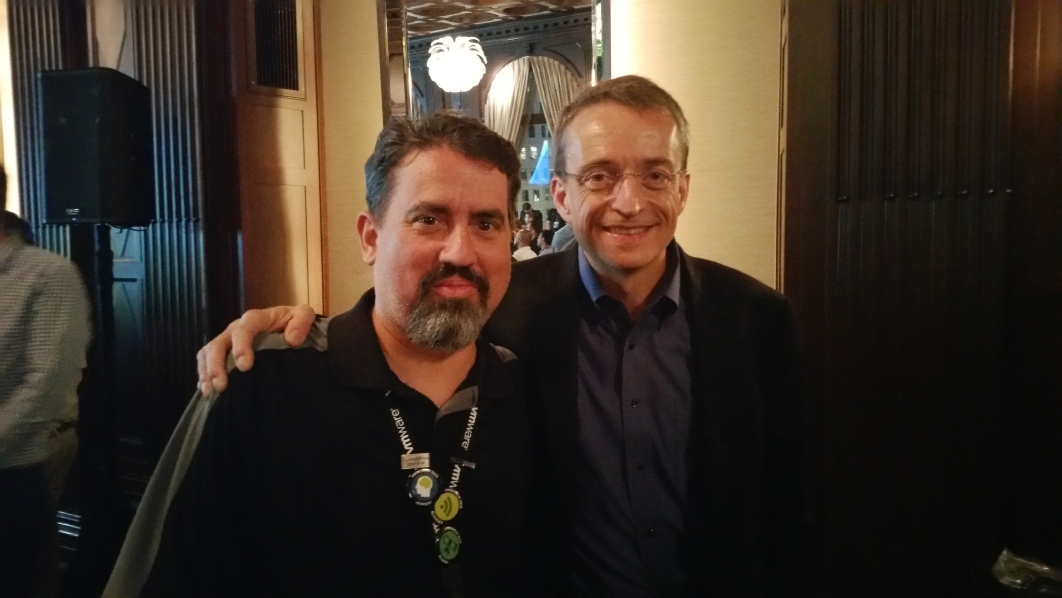