Has VMworld jumped the shark?

Another year, another VMworld, this would be #7 for me and I wanted pass along my thoughts of this one.

I arrived on Sunday afternoon, I just missed the earthquake which happened about 7 hours before my flight was leaving from Phoenix. When I read about the earthquake that morning I was a bit concerned thinking, a) did it damage anything that might impact the conference and b) I have to live in that recently seismically active area for 4 days where more aftershocks or “the big one” could occur. Thankfully the only damage around Moscone was limited to disrupting the sleep of hung over attendees who got in early. After arriving I checked into the hotel, went to Moscone to register and then down to the Solutions Exchange to help setup our booth and check in on things.

Let’s take a moment and talk about hotels, the availability and rates are ridiculous in SF. You’re typically looking at $300-$500/night if you want to be fairly close to the Moscone and of course who wouldn’t want to be. I hate walking and especially in SF when you have to deal with all the buses, cable cars, crazy taxi drivers and street people that are everywhere, so being as close to Moscone is a priority for me. My usual little known hotel which is only a block away from Moscone and very cheap was sold out this year though. So I had to go to plan B which was the Hilton where we had a block of rooms but it was about 5 blocks away. When it comes to hotels at VMworld I don’t care about amenities or how nice things look, if it has a bed, bathroom and wifi that’s all I need as I’m usually only there about 7 hours just to sleep. In comparison this is one thing that is ideal about having conferences in Las Vegas, mega-hotels. I usually never have to leave the hotel as the conference is in the same building.

Anyway Sunday was the opening of the Solutions Exchange, it was a real good crowd and I enjoyed talking to people and walking around checking out the many vendors. The Solutions Exchange area was well executed and probably the star of the show this year. I saw a lot of new vendors and it seemed a lot of the smaller vendors had a pretty big presence to take full advantage of the event as a place to shine and engage attendees. After the event shutdown I headed over to the VMunderground party which was in the Metreon this year which was a much more suitable venue for it given the large amount of people that attend it. It was very well planned and a great event so hats off to the group that makes it possible each year.

Monday was the general keynote session with Robin Matlock, Pat Gelsinger and Carl Eschenbach. The day 1 session is typically focused on strategy, vision and marketing but they also typically announce anything new as well. This year I found the keynote rather flat and boring, if it was on my DVR I probably would of fast-forwarded through the whole first half-hour. At the keynote they announced EVO, vCloud Suite 5.8, the vSphere 6.0 beta featuring VVols and VSAN 2.0 beta and vRealize. Let’s talk about those some more.

What’s new and exciting (or not)

The rumors of a VMware hyper-converged platform have been floating around for a while with the program name MARVIN. EVO is the official launch name now and it comes in 2 flavors, EVO:Rail which is a single hyper-converged appliance and EVO:Rack which is a super-sized version which as the name implies is a bunch of EVO:Rail’s filling a whole rack. VMware stressed they were not going to get into the hardware business (not yet at least) and they would work closely with their partners to develop EVO solutions. We’ll have to wait and see how well that plays out and customer interest in EVO.

In product renaming news we have vCloud Hybrid Service (vCHS) transforming into vCloud Air <insert Apple/Mac joke here> and various automation and management products transforming into the vRealize Suite which consists of:

VMware must have a whole department devoted to how they can continually rename their products to keep their customers confused. I kind of like the new vCloud Air name but it definitely sounds like an Apple product. The vRealize suite name is another story, to put it bluntly, it’s a pretty stupid sounding name. I get the definition of realize is “become fully aware of (something) as a fact; understand clearly” but to use it as a product suite name is dumb. If they are going to go that route why not vUnderstand or vComprehend instead. I’m sure they could of come up with a much cooler sounding name for it.

The vSphere 6.0 beta wasn’t really talked about much as it is still quite a ways out before it becomes available sometime in 2015. Pat did apologize for neglecting Virtual Volumes (VVols) which was first announced 2 years ago and not really heard about since then. If you read between the lines VMware put the majority of their development effort into VSAN and put VVols on the back-burner. You can probably understand the reason for that as VSAN is a revenue generating product for VMware and a vital piece of their SDDC vision where VVols is just a new external storage architecture to replace VMFS.

After the keynote I attended the HP session on VVols and then headed of to Chris Wolf’s session on hyper-converged infrastructure (EVO). Chris is a great speaker and it was good to find out more about what EVO was and how it would impact the partner ecosystem. They detailed the hardware configs for EVO and did some live demos of the installer process. After that it was on to the HP Blogger briefing which was a no PPT informal chat with some super techy guys and afterwards a performance by magician Andrew Mayne which was very fun to watch. In the evening I went to a dinner hosted by Infinio at Oola, it was great to see and talk with Carrie Rebar, Scott Lowe (Other), Scott Davis and a few customers. Infinio had a real nice presence at the show with a big booth and it was good to see a new start-up make a big splash. After dinner I headed over to Xangati’s party at Bourbon & Branch, a hidden Speakeasy from the old days of prohibition. I met up with Todd Scalzott there and hung out, had a few drinks and then off to the sidewalk to smoke stogies. B&B is kind of a neat place as their are no signs advertising it, passwords to get in and hidden rooms behind bookcases.

Tuesday was the day 2 general keynote session with Ben Fathi which is traditionally the fun one as it is more about the technology. I ended up watching it live-streamed from the hotel room which was a good quality stream. Much of the focus was on VDI (Horizion) and overall it wasn’t all that exciting like previous years as again there wasn’t a whole lot new to talk about, as a result I ended up tuning it out and not really paying attention to it. After the keynote I had to head to my speaking session which was a HP session that I was co-speaking in to highlight our VMware integration. From there I went to an EMC VVol  to see what they were doing with it, hung out in the Solutions Exchange, another blogger briefing and then off to the vExpert party with Calvin Zito. The vExpert party was fun as usual, VMware invites many of their executives and technical experts to mingle with the attendees. I appreciate the effort they put into this annual event. I ran across Pat Gelsinger at the event and got my photo with him for the 2nd year in a row. After that it was off to the Veeam party which is always epic, they outdid themselves this year with a much bigger venue with a nice outdoors space and it was crowded and a lot of fun. Thank you Veeam for not just doing it but doing it big.

Wednesday was a much more slow-paced and leisurely day, I hung out in the Solutions Exchange area a bit and then had to head to the airport for a flight later that evening. The official VMware parties are not all that great, I always look forward to big name entertainment at those kinds of events but VMware keeps it more low-key. As a result I usually end up heading back early instead of on Thursday morning.

Overall another great event, attendance was down this year, in a previous post gave my opinion why that might be. Special thanks to Tegile for the nice vExpert swag bags and Simplivity for the coffee press. I’ll leave you with a summary of what I thought was the Good, the Bad and the Ugly at VMworld this year along with a few pics.

About to land at SFO… 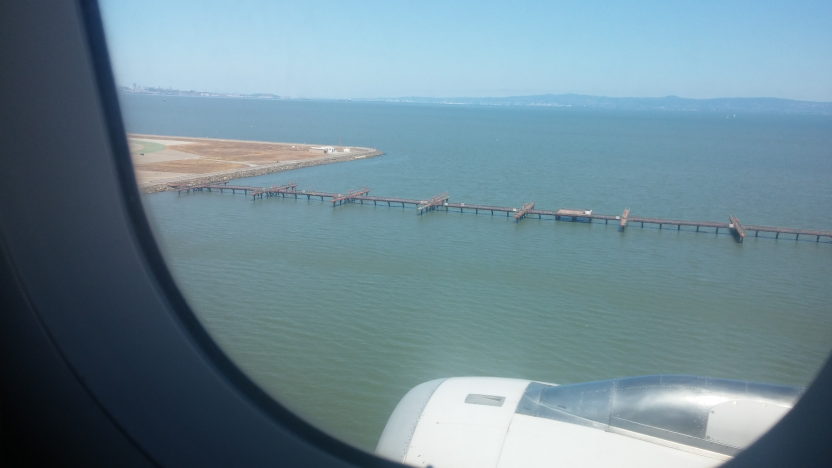 View from the VMunderground party… 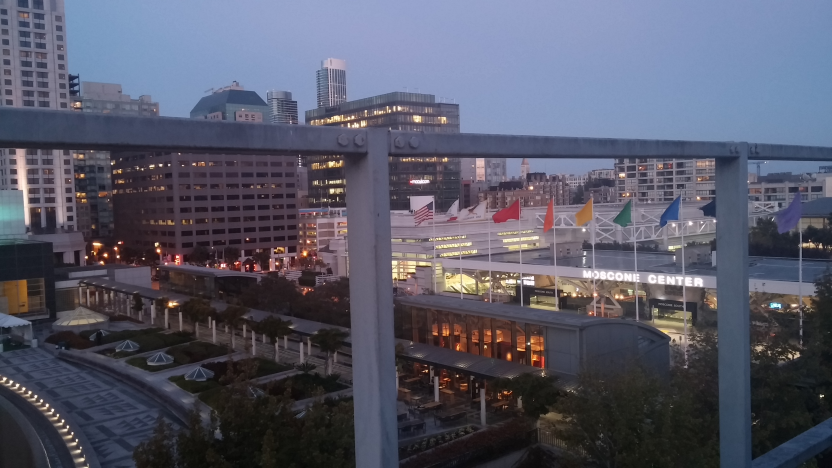 Day 1 keynote about to start… 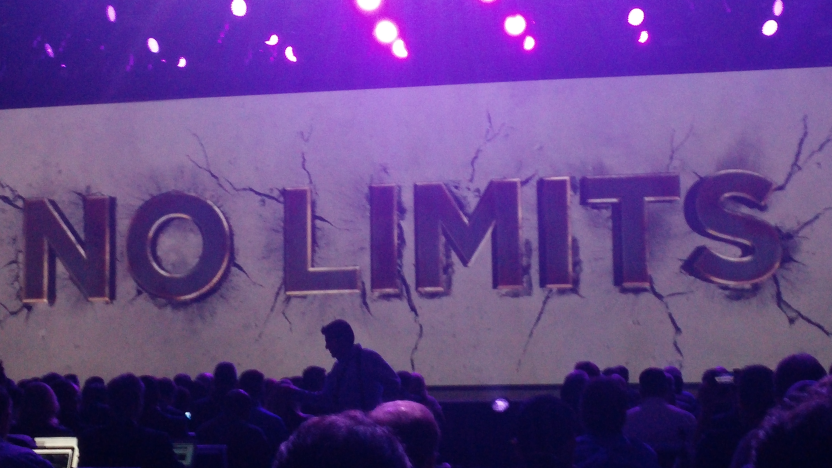 What No Limits is all about… 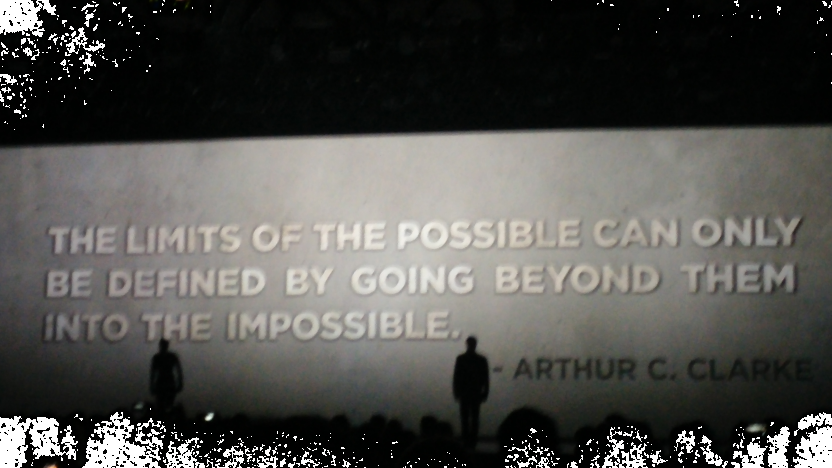 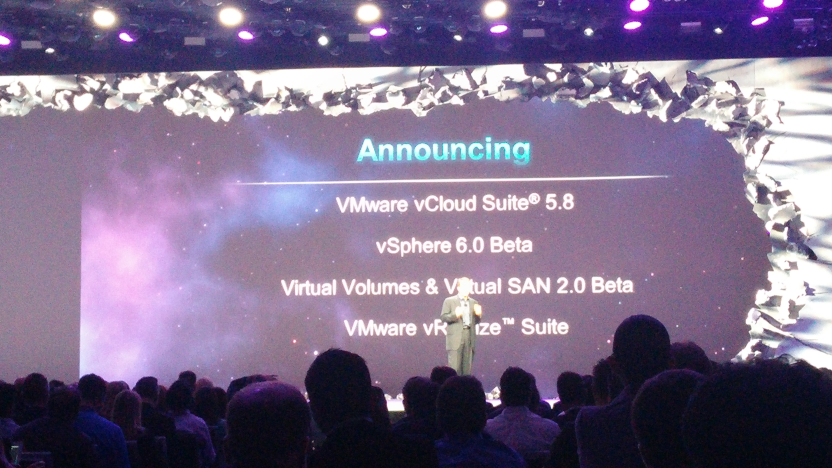 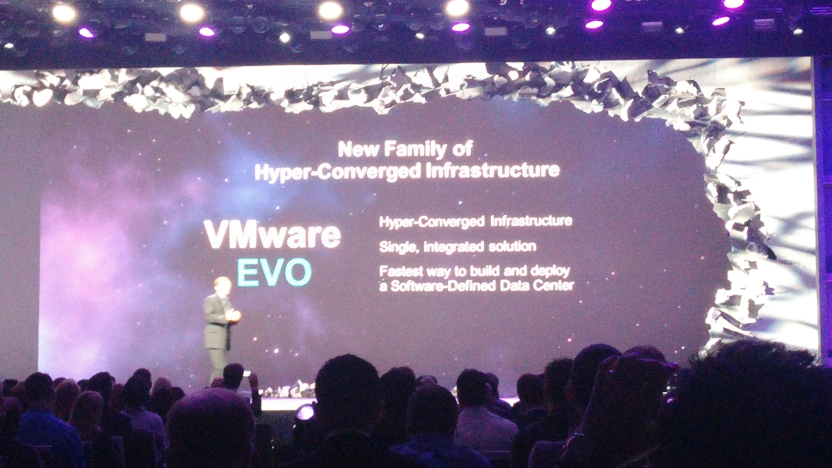 What’s a gooey egg have to do with VMware?… 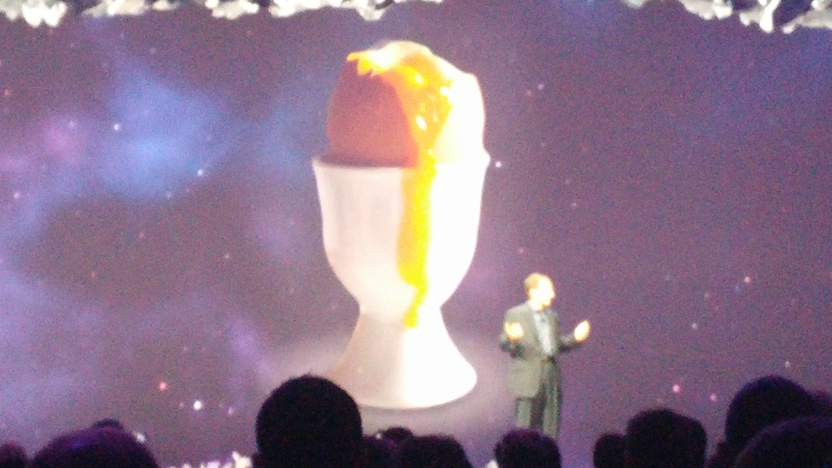 It describes most data center security implementations, hard & crusty on the outside, soft & gooey on the inside… 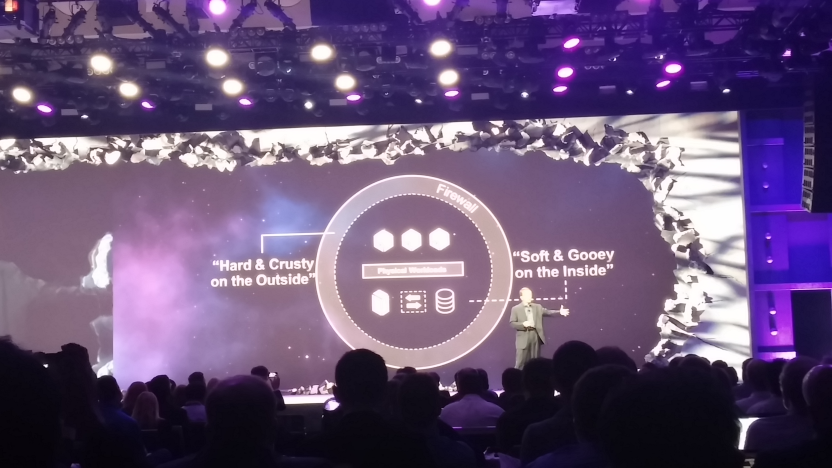 Chris Wolf, VMware’s CTO of the Americas talking up EVO… 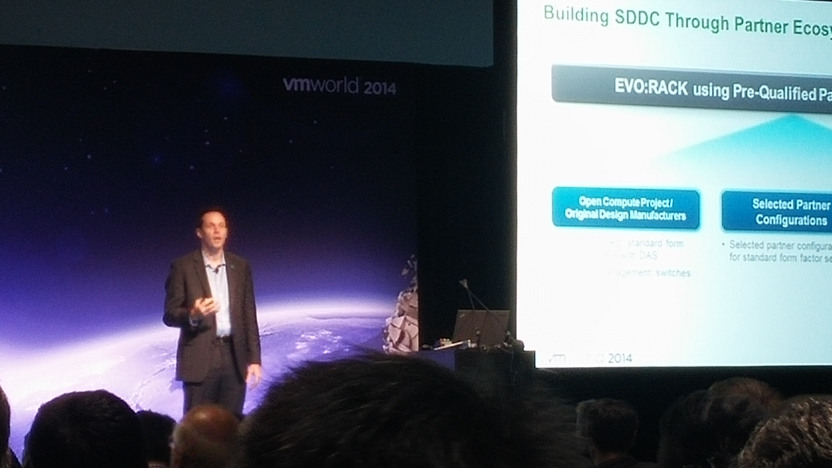 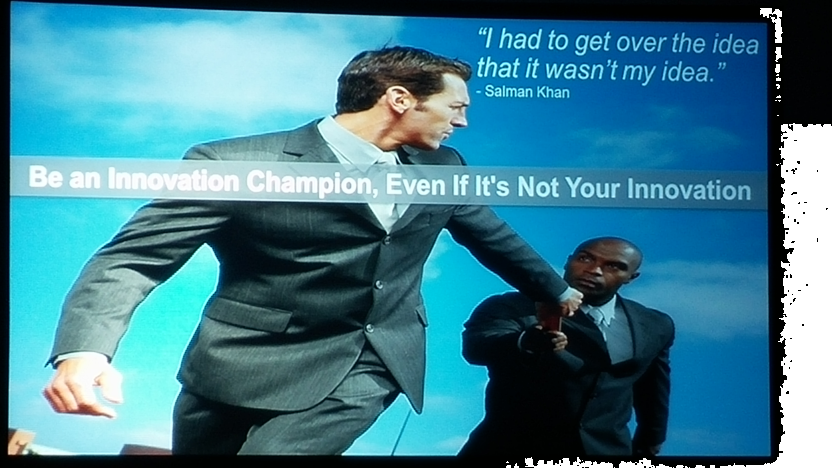 Magician Andrew Mayne performing at the HP Blogger Briefing, one of the bloggers twists his hand 360 degrees… 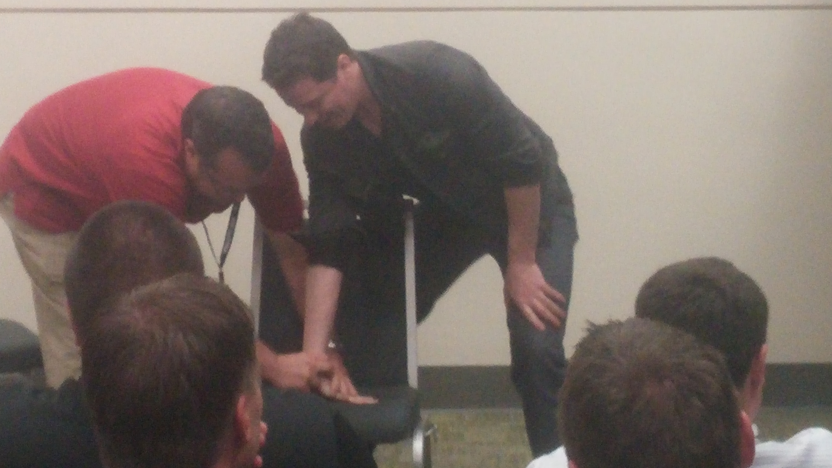 Another shot of Andrew Mayne performing… 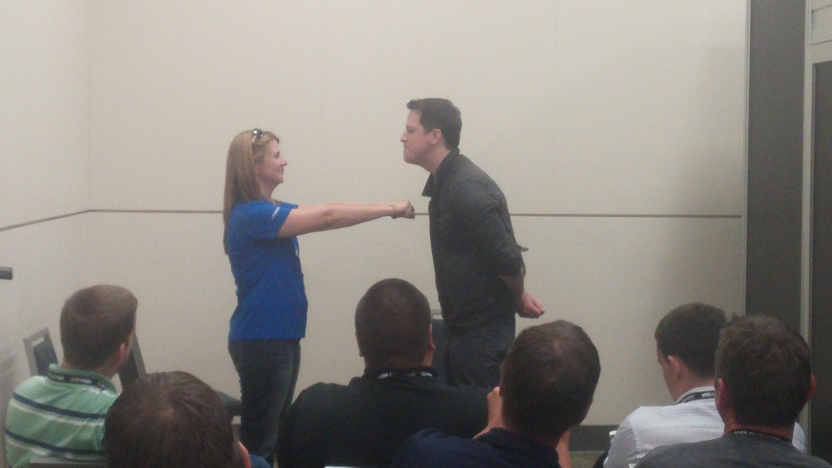 Andrew Mayne pulling physical objects out of a virtual rack… 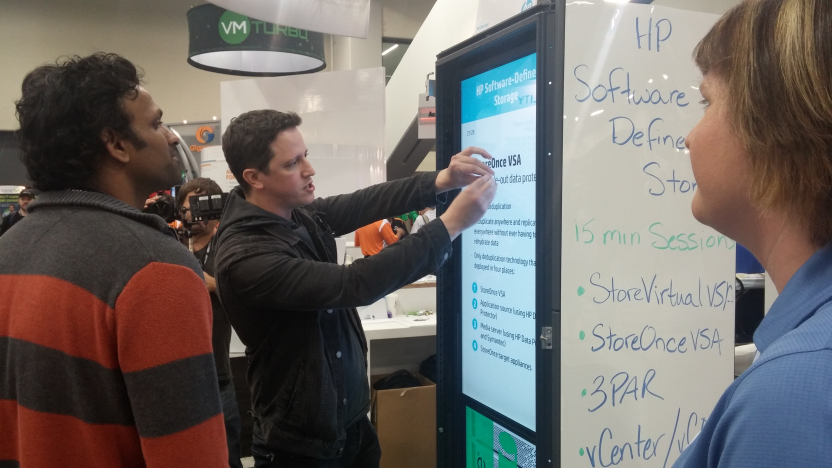 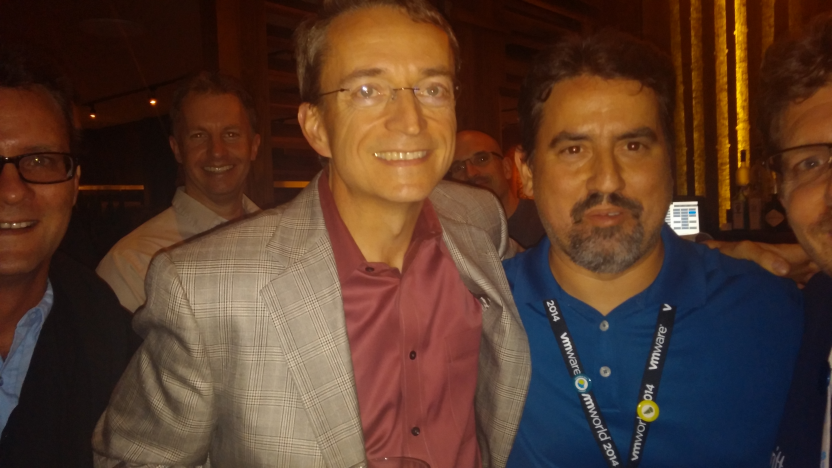 What happens when an EMC’er walks into a bar, 50 shots of Jager suddenly appear… 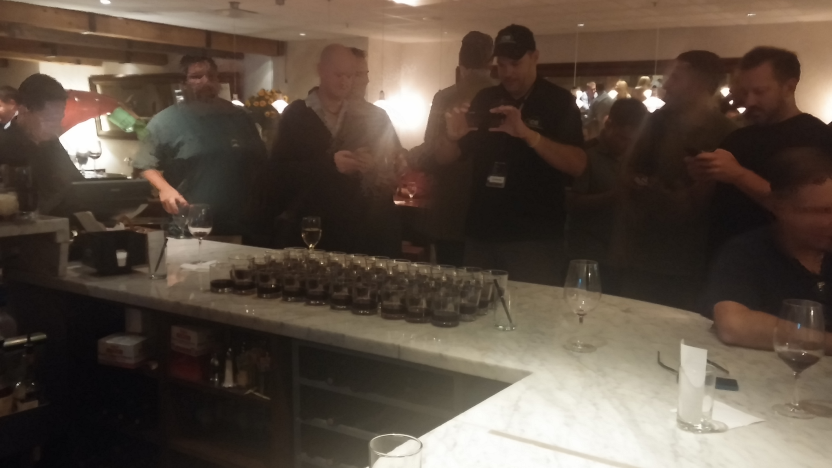 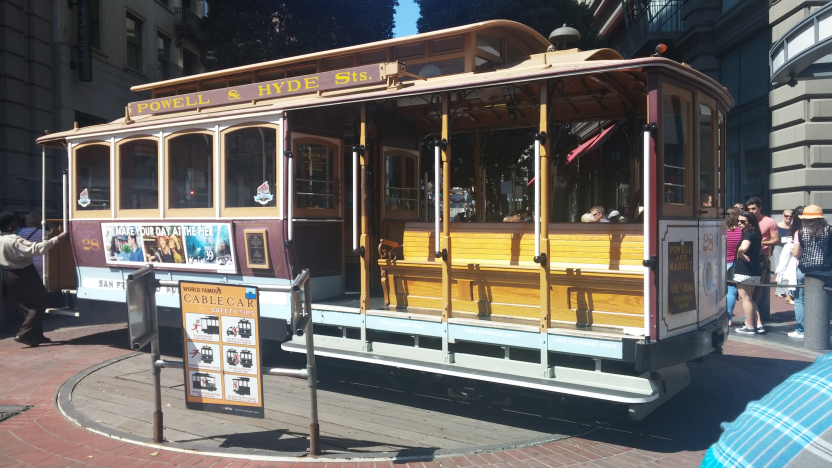 Myself with the gang from Infinio… 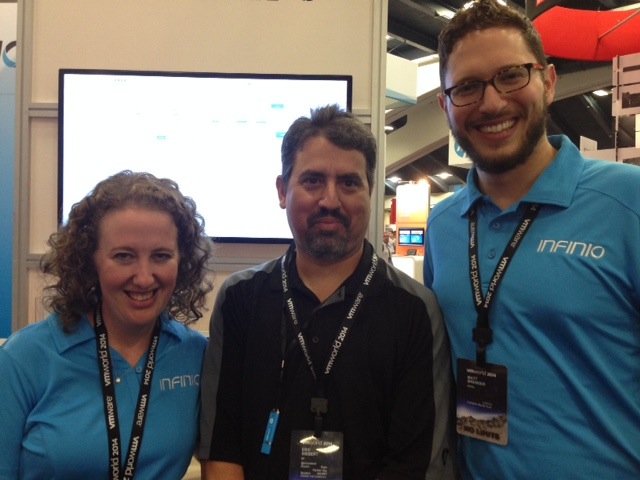 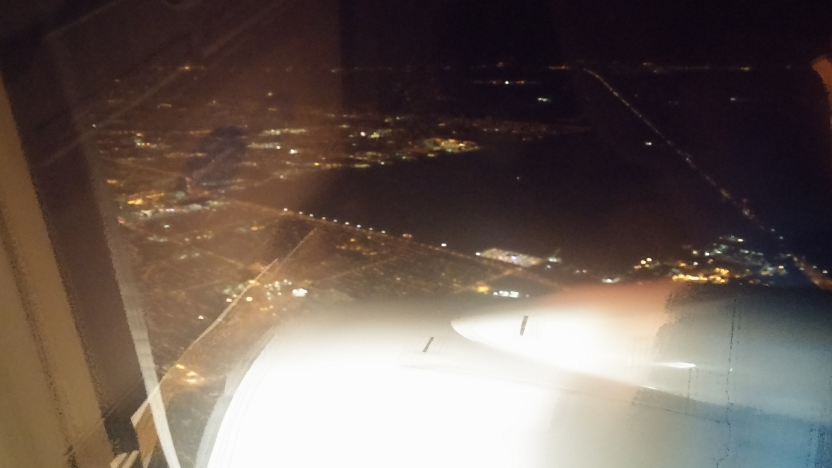