My thoughts and observations on VMworld 2019

I already did a whole big post on my experience at VMworld this year but since there was a lot of activity centered around vVols at VMworld this year I thought I would do a post to highlight that as last year vVols didn’t get as much love at VMworld. Before I start I’d like to point out the maybe not so obvious that VMware changed the case of vVols right before VMworld and it is no longer VVols, it’s vVols. After typing VVols a hundred times you’ll eventually get used to spelling it the new way.

So compared to last year there was definitely a lot more talk and activities around vVols at VMworld this year, this was mainly coming from VMware which is were it really needs to come from. I know VMware expects partners to market vVols but customers really look to VMware for guidance and direction more so then partners and having VMware step it up this year with promoting vVols more was badly needed. To that end I have to give a lot of credit to Lee Caswell who I’ve met with many times and always plead for VMware’s help promoting vVols. Lee’s influence on VMware’s vVols activities from the top down has been very apparent both before VMworld, during and hopefully continuing on after VMworld. Also kudos to Jason Massae for fighting in the trenches on vVols.

Now on the partner side except for a few top vVols partners it’s been very quiet. Pure and HPE have been the most vocal on vVols which is a reflection on where they are at with the most mature and built out vVols implementations. NetApp has been doing an OK job promoting it, but after that it largely silence from all the other vendors that support it. I know a lot of them are still playing catch up with vVols and I’m hoping once they get there they do more to promote it.

So now let’s talk about VMworld, and right away I want to point out something that I don’t think VMware has previously done at VMworld, have a dedicated vVols demo station. Well this year they had one! That was an unexpected but very welcome sight to see. The first year vVols went GA they had a vVols pavilion setup on the 2nd floor of Moscone West that highlighted vendor implementations of vVols. But I haven’t seen anything after that so seeing VMware’s vVol demo station was great. I talked briefly with one of the guys who was staffing it and they had some good traffic there. 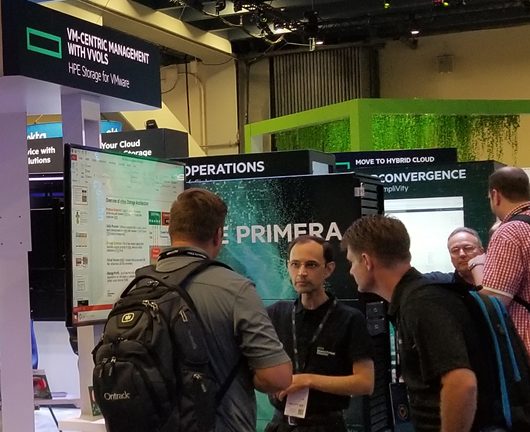 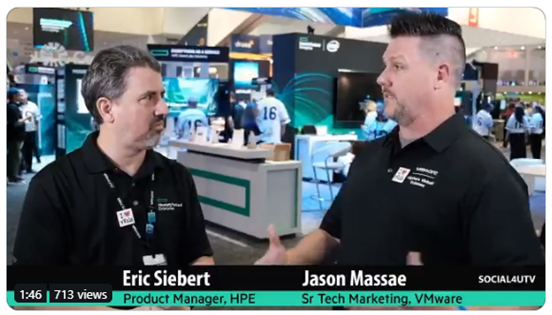 I know Andy Banta from NetApp also presented on vVols in their booth as I happened to walk by during his presentation and I’m sure Cody Hosterman kept busy talking about vVols as well at the Pure booth. 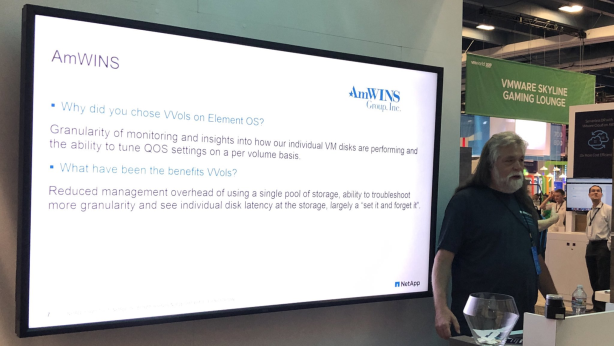 There was a decent amount of vVols sessions at VMworld this year. I’m not going to list them all here but I have a complete list in this post. If you didn’t catch them at VMworld definitely give the replays a watch. I’d like to highlight a few though here, the first and most exciting one was the tech preview of SRM support for vVols. It’s been a very long wait for this and after announcing it last year at VMworld it’s good to see VMware close to delivering it. There was good attendance at that session and a lot of good questions and Velina, Cody & Bharath did a great job presenting. 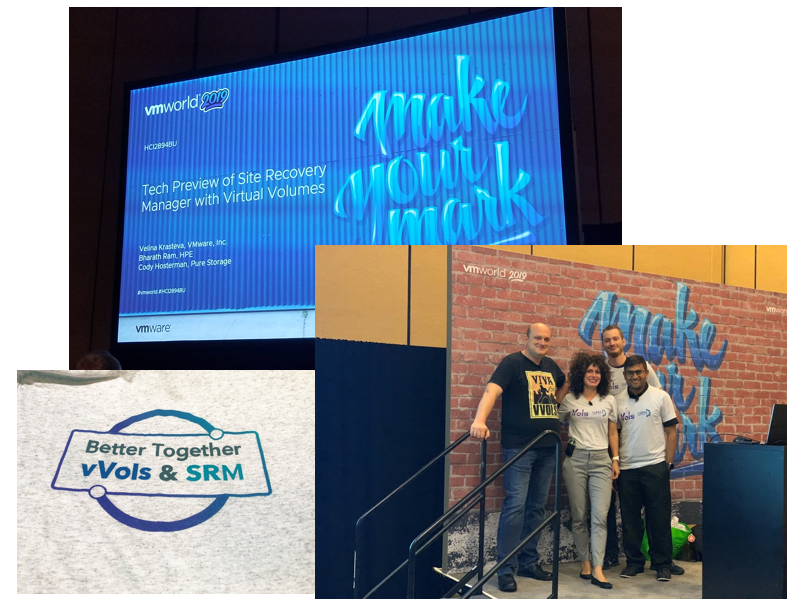 Next there was the Industry on vVols partner tech panel which featured myself representing HPE, Andy Banta representing NetApp, Cody Hosterman representing Pure and Karl Owen representing Dell/EMC. The session was mostly Q&A and we had plenty of questions and comments in the room, also present was Bryan Young, the PM for vVols and Howard Marks, professional vVols heckler which made it interesting and fun. Below are the “five horseman of the vVols apocalypse” as Howard called it, why am I the only one looking at the camera! 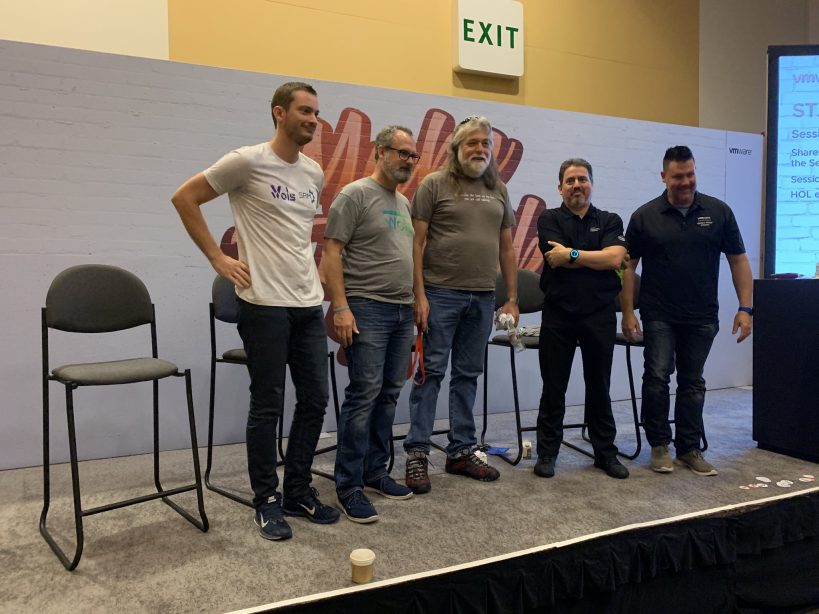 There was also the usual vVols technical deep dive session by Jason Massae that has run for the last 5 years. The were a good amount of people there but attendance seemed about half of last year. As this session is largely similar content each year I imagine some people don’t repeat this session year after year but for those new to vVols it’s a good session to attend.

Finally I’d like to shout out for Cody Hosterman’s why should I use vVols session, I didn’t get to attend it but I heard it was a great session. 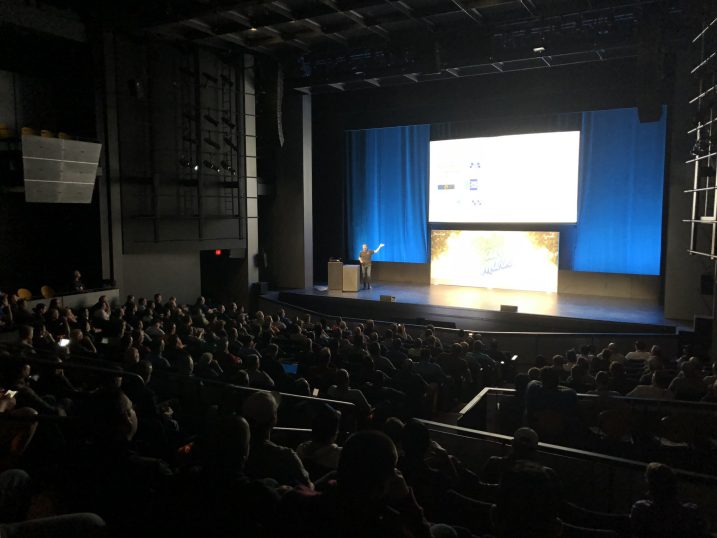 Now while all these sessions were recorded, only attendees can watch them which is unfortunate, I would sincerely hope VMware could post these to a public site as well as they would be great for the 99% of VMware customers who didn’t go to VMworld to be able to learn why they should consider migrating to vVols.

Another great thing that VMware did this year was bring a lot of vVols swag to VMworld which included a good variety of stickers and T-shirts to give away to people. That’s also something they haven’t done in a while, hopefully they keep that up. 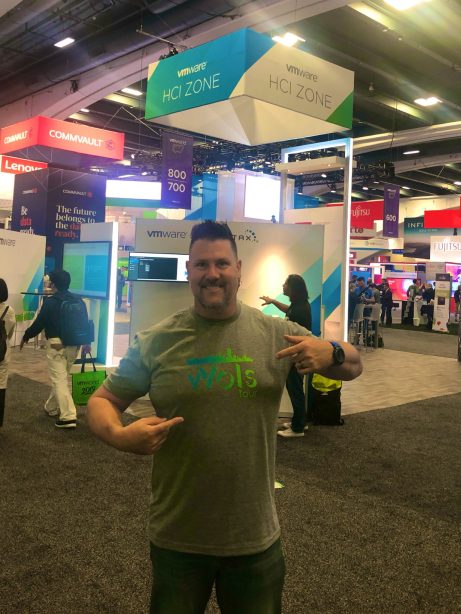 At my own expense I also had a new batch of vVols buttons made this year which were quickly gone. I even gave one to Pat Gelsinger who promptly put it on for the 2nd year in a row. Chatting with Pat briefly he called out HPE for helping lead the charge with vVols which was nice to hear.

Here’s Jason from VMware and Cody from Pure with their buttons on. 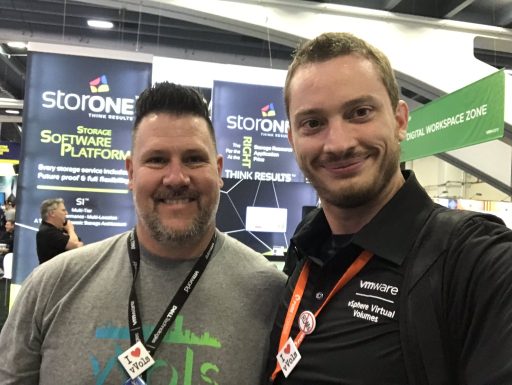 I’d also like to call out something that Lee Caswell posted right after the show were he explains why vVols has been slow early on and how it is much different today with vVols adoption expected to be at least 5% of the VMware install base in 2020 and on-track to triple in 2021. I’ll be doing another post shortly on vVols adoption. 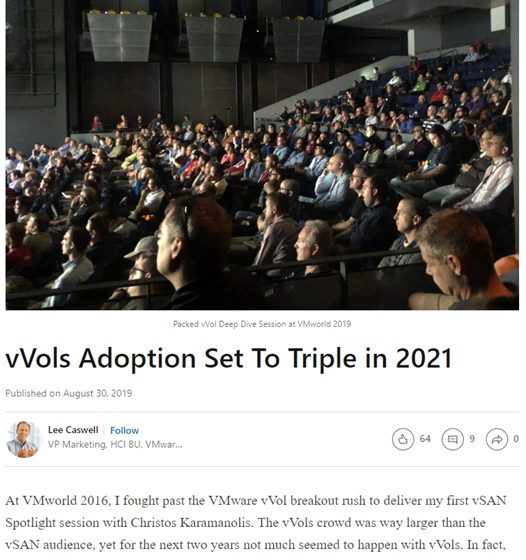 Finally while VMworld 2019 US is over, VMworld 2019 EMEA is coming up soon and there is more vVols stuff on tap there.