VMworld attendance continues to climb, when will it peak?

This year VMware announced record attendance of over 22,000 people that attended VMworld. While their news release said over 22,000 at one of the keynotes it was stated their were 22,500 attendees. If you look at the graph below you can see every year is a record attendance for VMworld except for 2009 when it briefly dipped by 1500 attendees. Why the big dip in 2009? The shape of the economy probably played a factor that year which caused many IT departments to tighten their belts and limit travel and event expenses. Virtualization was also not as widely adopted back then as well which may of been a factor. The good news is that it bounced back in a big way the following year and has climbed every year. What I’d like to know is if VMware is counting their own employees and partner booth staff in their attendee numbers, I’m pretty confident that they are. It would be interesting to see a breakdown of all the different badge types that they issue for the show. 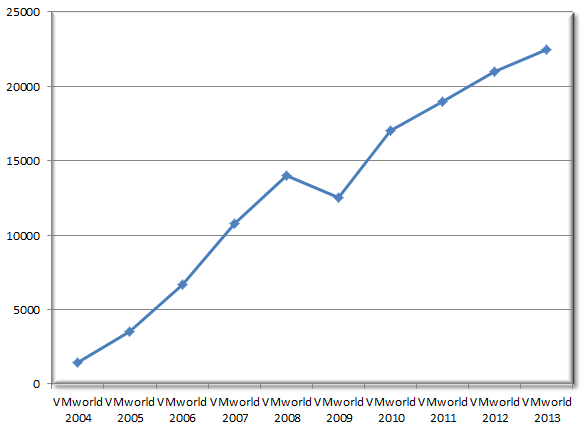 To provide some contrast to this, here’s how VMworld attendance stacked up against other popular tech conferences. Note while VMware is very open about the number of people that attend their annual conferences, many companies seem to not publicize that information. 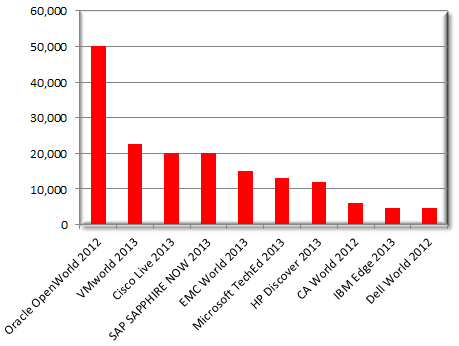 At some point I’m sure VMworld will peak out in attendance if I had to make a guess I’d say that next year may be the attendance tipping point. But who knows for sure, virtualization is still hot and VMworld these days is not just about virtualization but also all the technologies, products and services that interact with it which is quite a big list. We’ll have to wait and see what the future holds for VMworld.