Nominations for the 2014 Top Blog voting categories are now open!

VMware tells its partners – No Soup For You 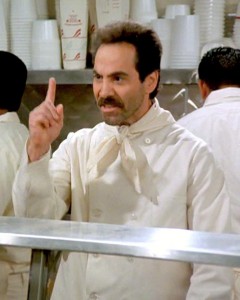 In case you hadn’t heard, VMware has become the soup nazi at their annual Partner Exchange (PEX) conference telling both Veeam and Nutanix and probably more I’m sure, thanks but no thanks, we don’t want you at our partner conference. While it’s understandable that VMware would not want vendor’s like Microsoft, Oracle & Citrix at their conference, they’ve started excluding more vendors that have any type of conflict of interest with VMware products.

VMware walks a fine line these days as they compete with just about any vendor that makes software products for the data center and they also compete with most hardware vendors as well. When it comes to hardware VMware prefers you to buy dumb hardware and let their software layer handle the intelligence of the hardware. The reality of it is, VMware really competes with almost every hardware and software and even cloud vendor out there, some more so than others but the way it is, it’s VMware versus all comers for world domination in the data center.

This wasn’t always the case, a long time ago in a data center far far away, server virtualization was in its infancy and VMware was a little known company that was selling a disruptive technology that would go against the grain of the traditional data center. Back then VMware sold very few products, basically a hypervisor (ESX) and a server to manage it (VirtualCenter). As server virtualization took off and started to become more popular a huge 3rd party ecosystem grew as vendors sprung up to fulfill the needs caused by this new and unconventional shift in the data center.

There were needs in almost every area including security, backup & recovery, management, automation, monitoring and much more. These 3rd party products complemented VMware’s hypervisor and made it stronger and just like Apple and their dominance with 3rd party apps, was a combination that was hard to beat. Then as virtualization took off VMware started branching out, making acquisitions to expand their line-up to fill in the gaps that 3rd party products used to fulfill for them.

If you look at the sponsor list for PEX this year and take out the big five that VMware can’t afford to exclude, the rest looks almost like a line-up for a minor league baseball team. It’s a shame that VMware would start shutting the door as they have many great loyal partners that have helped carry them over the years. I know PEX is a different type of conference and you have both partners and re-sellers there but if VMware is tightening down on who can be at PEX, are they going to start doing the same thing at VMworld?

It’s a shame that Veeam won’t be at PEX this year, they are one of the companies that rode the coat tails of virtualization and have become a huge success as a result. While it’s VMware’s conference and they have every right to pick and choose who can be there, it’s definitely a sign that VMware has gotten to the point that they really don’t need to rely on their partners as much as they have in the past.