An overview of what’s new in VMware vSAN 6.6

It was back in October when VMware announced vSAN 6.5 and  now just 6 months later they are announcing the latest version of vSAN, 6.6. With this new release vSAN turns 3 years old and it’s come a long way in those 3 years. VMware claims this is the biggest release yet for vSAN but if you look at what’s new in this release it’s mainly a combination of a lot of little things rather than some of the big things in prior releases like dedupe, compression, iSCSI support, etc. It is however an impressive list of enhancements in this release which should make for an exciting upgrade for customers.

As usual with each new release, VMware posts their customer adoption numbers for vSAN and as of right now they are claiming 7,000+ customers, below is their customer counts by release.

From the numbers it shows that VMware is adding about 2,000 customers every 6 months or about 11 customers a day which is an impressive growth rate. Now back to what’s new in this release, the below slide illustrates the impressive list of what’s new compared to prior versions backing up VMware’s claim of the biggest vSAN release ever.

Now some of these things are fairly minor and I don’t know if I would claim they are ‘major’ features. This release seems to polish and enhance a lot of things to make for an overall more improved and mature product. I’m not going to go into a lot of detail on all these but I will highlight a few things, first here’s the complete list in an easier to read format:

Support for data at rest encryption isn’t really anything new as it was introduced in vSphere 6.5 and can be used with any type of storage device and applied to individual VMs. Encryption with vSAN can also be done at the cluster level now so your entire vSAN environment is encrypted for those that desire it. Encryption is resource intensive though and adds overhead as VMware documented so you may instead want to implement it at the VM level instead.

—————–  Begin update
As Lee points out in the comments, a big difference with encryption in vSAN 6.6 is that storage efficiencies are preserved. This is notable as data is now encrypted after it is deduped and compressed which is important as if you first encrypted it using the standard VM encryption in vSphere 6.5, you wouldn’t really be able to dedupe or compress it effectively. Essentially what happens in vSAN 6.6 is writes are broken into 4K blocks, they then get a checksum, then get deduped, then compressed, and finally encrypted (512b or smaller blocks)
—————– End update

VMware has made improvements to stretched clustering in vSAN 6.6 allowing for storage redundancy both within a site AND across sites at the same time. This provides protection against entire site outages as expected but also protection against host outages within a site. They also made it easier to configure options that allow you to protect VMs across a site, or just within a single site. Finally they made it easier to change the host location of the witness component which is essentially the 3rd party mediator between 2 sites.

Performance improvements are always welcomed especially around features that can tax the host and impact workloads like dedupe and compression. In vSAN 6.6 VMware spent considerable time optimizing I/O handling and efficiency to help reduce overhead and improve overall performance. To accomplish this they did a number of things which are detailed below:

VMware performed testing between vSAN 6.5 & vSAN 6.6 using 70/30 random workloads and found 53%-63% improvement in performance which are quite significant. If nothing else this alone makes for a good reason to upgrade.

To find out even more about vSAN 6.6 check out the below links from VMware:

Public voting for VMworld 2017 sessions is open through April 13th

Public voting for VMworld 2017 sessions is now open through April 13th. The public voting is just one part of a whole scoring process that includes also content committee voting and sponsor voting. VMware reserves a small chunk of session slots (5%) that they call Customer Choice that can make it in via the public voting, the remainder of the session slots typically are filled up by VMware sessions, sponsor sessions and sessions that score favorably through the content committee voting.

I’d greatly appreciate your consideration in voting for my 2 submissions, one is a session on the new VVols array based replication feature in vSphere 6.5, my co-speaker is one of our VVol engineers who has been doing the development work on VVol replication for us so it will be a very technical session. The other is a why VVols type session with Pete Flecha from VMware that covers the top 10 reasons why you would want to implement VVols right now. Simply search on my last name (Siebert) or session IDs (2376 & 2422) to find them.

You can vote on as many sessions as you want, since the list is so large (1,499) you are better of searching or filtering it on topics that interest you. You can only cast one vote for a session though. To vote on sessions do the following just go to the VMworld Session Voting page and click the Vote Now button at the bottom of the page. If you don’t have an existing VMworld account you can create one for free, you’ll need to enter some basic required information (username, email, address info) and then an account will be created for you.

Once you are at the Content Catalog you will see the fill list of sessions, enter a search term (i.e. speaker name, VVols, VSAN, etc.) or select filters from the left side (track/sub-track/type). Note that VMware has changed the voting method this year, in prior years you simply clicked a star icon to vote for a session, this year you can actually grade the session on a scale from 1 star (poor) to 5 stars (excellent). So instead of just simply selecting all the sessions that you like, now they want you to grade each session (see below figure). The big difference here is by clicking the stars this year you’re not simply voting like a thumbs up for the session, your votes can now either positively or negatively influence the overall scoring for the session.

You can vote for as many sessions as you want, so head on over and rock the vote! 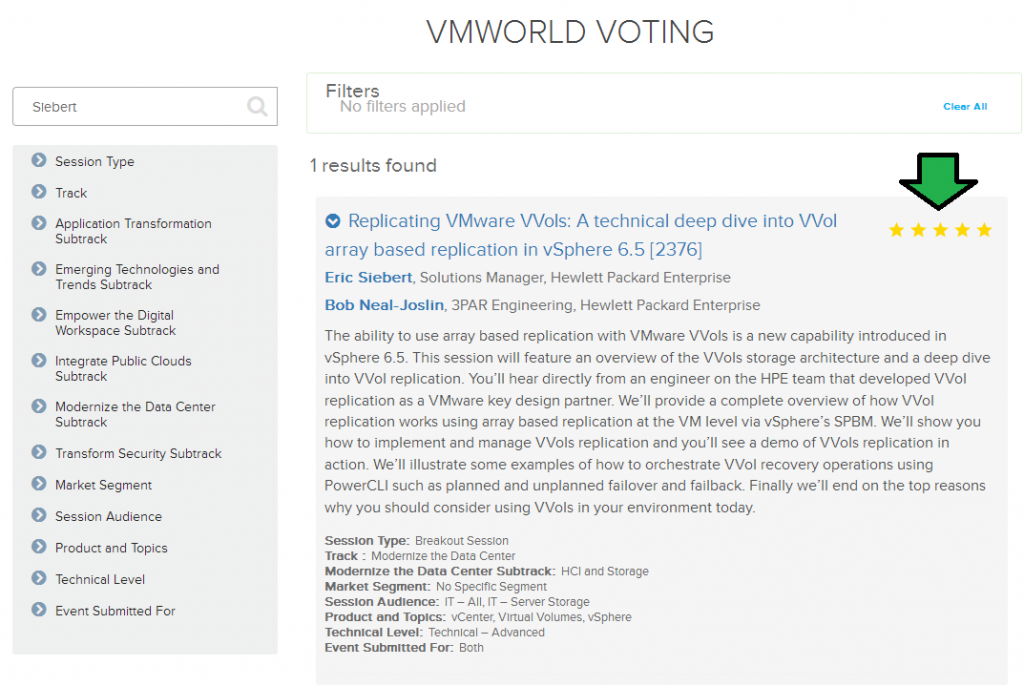 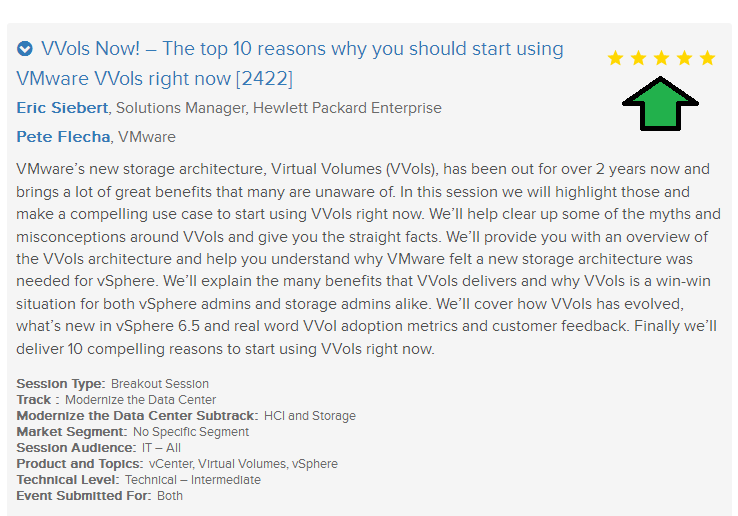 The question often comes up, when should I use Raw Device Mappings (RDMs) instead of traditional VMFS/VMDK virtual disks. The answer for this usually is, always use VMFS unless you fit into specific use cases. An RDM is raw LUN that is presented directly to a VM instead of creating a traditional virtual disk on a VMFS datastore. Because a VM is directly accessing a LUN there is a natural tendency to think that a RDM would provide better performance as a VM is reading/writing directly to a LUN and not having to deal with the overhead of the VMFS file system. While you might think that, it’s not the case, RDM’s provide the same performance levels as a VM on VMFS does. To prove this VMware performed testing and published a white paper way back in 2007 on ESX 3.0 were they did head to head testing of the same workloads on a VM on VMFS and a VM using an RDM. The conclusions of their testing was:

They went on to list some of the use cases that one might want to use an RDM such as a clustering solution like MSCS or when you need to take array snapshots of a single VM. Some additional use cases might be around an application that needs to write SCSI commands directly to a LUN or if you may potentially need to move an application from a VM to a physical server where you can move the LUN. Performance should really never be a valid use case for using an RDM as they also have some disadvantages which include more difficult management and certain vSphere feature restrictions.

They also tested VMFS vs RDM again with vSphere 5.1 and once again the conclusions were the same:

Well those older recommendations still apply today and to proof that VMware just published a new white paper that examine SQL Server performance on vSphere 6.5. As part of that white paper they chose revisit the VMFS vs RDM topic and included testing of SQL Server performance on both VMFS and RDM disk. Not surprisingly the results were the same, in fact they found VMFS performed ever so slightly better than an RDM disk. The conclusions of this recent testing was:

You can see the results in the below graph which validates VMware’s recommendation to use VMFS by default unless you have a special functional requirement that would require using an RDM. 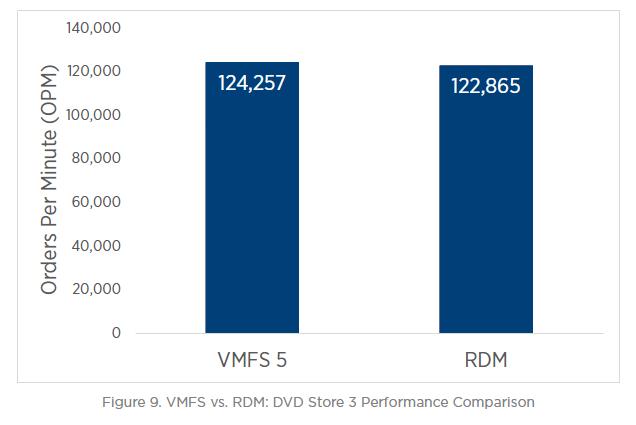