Want to win a sweet kit for your home lab?

How to experience VMworld EMEA 2016 without attending it

Oh the irony in yesterday’s announcement by VMware that they are now partnering up with Amazon Web Services to offer vSphere as a Service running in the AWS cloud. This is quite a change of heart from their stance years ago when they saw AWS as a rival and enemy. Remember back in 2013 when they first announced their vCloud Hybrid Service running in VMware managed data centers in conjunction with Savvis. They have steadily built out their now called vCloud Air infrastructure to many locations across the globe to provide vSphere as a Service to customers to better compete with their main rival AWS in the cloud market.

As part of that rivalry AWS launched a management portal intended to attract VMware customers to AWS by allowing them to easily import VMs into AWS through vCenter. VMware quickly responded warning customers of all the management and integration complexities that could be jeopardized by doing that. Pat Gelsinger also lashed out at AWS saying “We want to own corporate workload, We all lose if they end up in these commodity public clouds. We want to extend our franchise from the private cloud into the public cloud and uniquely enable our customers with the benefits of both. Own the corporate workload now and forever.”

Fast forward to today and it appears VMware has had a change of heart and is now partnering with Amazon Web Services to offer vSphere as a Service on AWS. What is not clear though is what VMware intends to do with their existing vCloud Air infrastructure that it offers both within its own 10 data centers and across over 4,000 cloud partners across the world. It would seem like they are simply trying to expand their presence to one of the biggest cloud service providers in the world, Amazon enjoys 31% percent cloud market share and is growing like crazy (63% YoY). It makes total sense that VMware would want to tap into that, AWS has a great reputation and lots of cloud muscle and VMware opens itself to a much big market. With that much added capacity VMware may eventually decide to get out of the data center business and rely on it’s partners which makes sense as they are primarily a software company.

So lets now take a look at the details of this announcement. One thing to note is that this new service has only been announced and there is a bit of a long wait for it to be available, VMware is stating that it will be available in mid 2017. If you are interested in trying it out VMware does have a beta form that you can fill out to apply and also get updates about the service. There will be two licensing options for this service, on-demand (hourly) and subscription-based (1 year, 3 year), customers will also be able to leverage their existing investments in VMware licenses through VMware customer loyalty programs.

Another thing to note is VMware is not referring to this as vCloud Air, it is specifically being referred to as VMware Cloud on AWS. vCloud Air is specific to all of their other public cloud offerings and services. VMware laid the groundwork as a key enabler for this type of solution at VMworld in August with their Cross-Cloud Architecture announcement. While VMware Cloud will be running on AWS infrastructure, VMware will still be managing it. The overall solution as pictured below allows customers to run ESXi on dedicated infrastructure (not nested) in AWS data centers while having management (vCenter) running within their own data centers (for on prem vSphere) as well with vCenter running in AWS and at the same time having access to value added AWS Services.

VMware is offering their full software stack on AWS which includes VSAN for storage and NSX for networking, replication capabilities and more. All of this offering is 100% managed by VMware, that includes buying it through VMware, the configuration and upgrades to the environments and support is also through VMware. 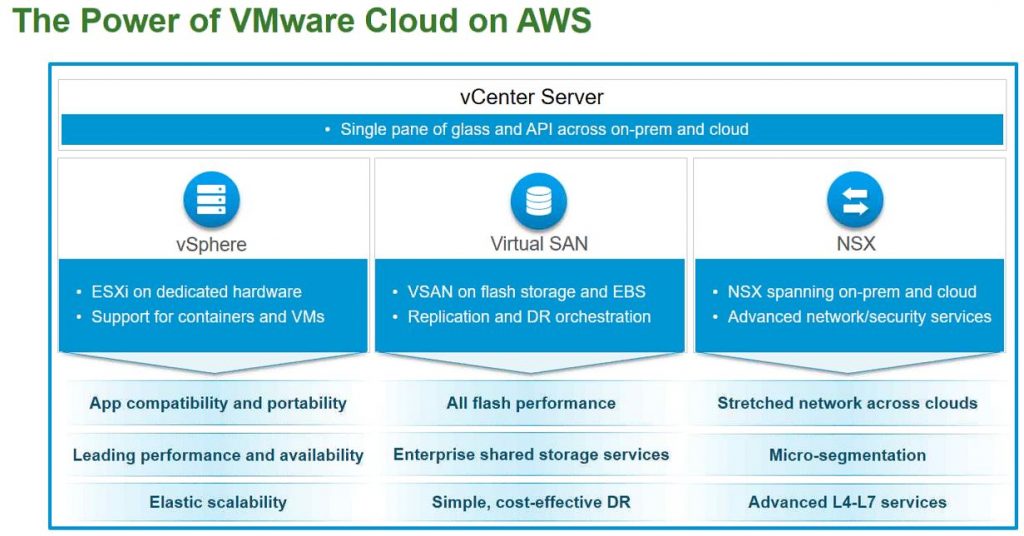 Because this is a 100% native vSphere environment it will be managed by the customer using all of the native tools, scripts and familiar UIs that they use to manage their own vSphere environment as shown below, there is no AWS management UI layered on top of this. Because it is running in AWS it makes re-sizing simple as additional AWS infrastructure will automatically be allocated and added into existing clusters. Since it can be managed alongside existing customer on-premise vSphere infrastructure you could potentially also migrate VMs via vMotion back and forth as needed. 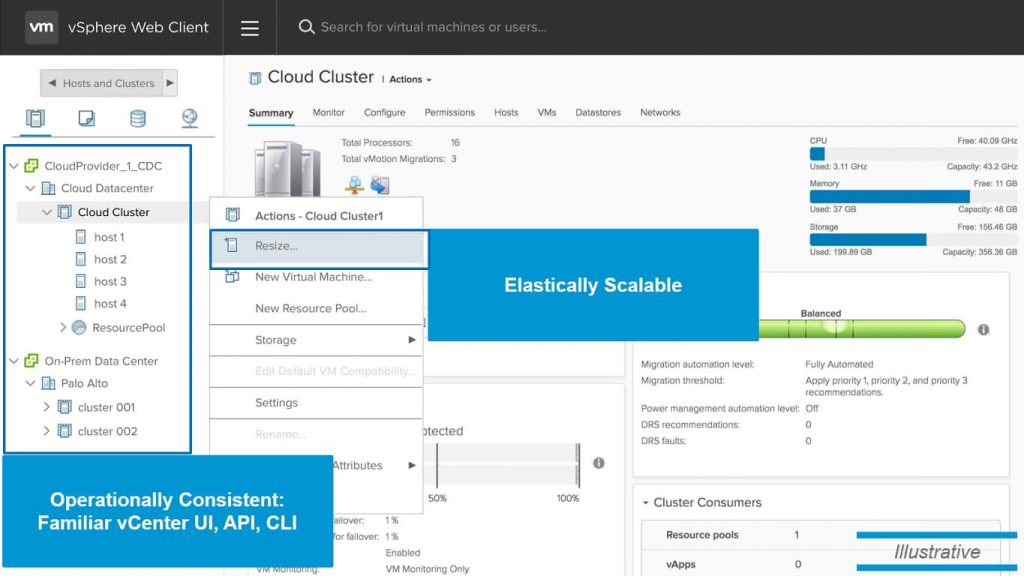 The key components in this solution are shown below, the first is what VMware refers to as the Service Console (not to be confused with the ESX Service Console), the Service Console is a VMware provided service that runs as a web application on VMware’s website (not AWS). The Service Console provides you with all of the administrative for the service itself which includes sign-up, provisioning, scaling up/down, billing and more. You are not doing any direct vSphere management through the Service Console. The next component is the Cloud Data Center itself which is simply the combination of AWS supplied hardware and the vSphere software stack. The AWS Global Infrastructure is the next component which is essentially their networking, data center services and everything else that makes AWS tick, again the billing is all-inclusive and comes from VMware itself not AWS. The whole solution is designed to look like it is coming directly from VMware with AWS operating transparently in the background. 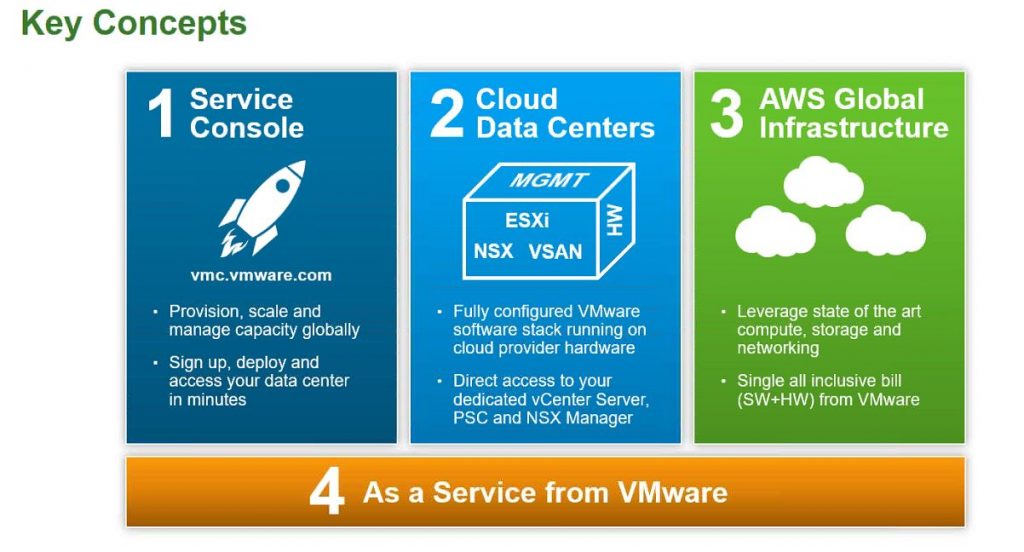 The below figure shows what the Service Console UI looks like, it’s a simple HTML5 web-based interface that VMware developed for the initial setup and ongoing management of the VMware Cloud services on AWS. From here you can create deploy new VMware Cloud environments, see the status of existing ones, open the vCenter web UI for each instance and other actions for provisioning, scaling and billing. It is all designed to support VMware’s REST API’s so you could automate many of these actions through scripting. The authentication mechanism is the existing My VMware one that VMware uses today to manage support, licenses and billing which allows you to have one account for both your on prem vSphere and AWS vSphere cloud environments. Again, it’s designed to be a one stop shop at VMware for everything.

Next the below figure illustrates the combination of the AWS hardware and infrastructure combined with the VMware software stack. It’s pretty much the same stuff that you would deploy in your own data center. vCenter Server runs as an appliance, it can be deployed stand alone or in linked mode for single pane of glass management with your own on prem vCenter environment. VSAN, NSX Manager and Platform Services Controller are installed and available and of course as many ESXi hosts are configured on dedicated hardware as needed to support your requirements based on the capacity you specify. All of this is pre-configured and pre-provisioned as part of the service, you do not have to run through and set any of this up your self which is what this type of solution is all about, insert credit card and out pops a running vSphere environment. The other nice thing about this is VMware is responsible for keeping your environment up to date with patches and new vSphere versions, you don’t have to do a thing. 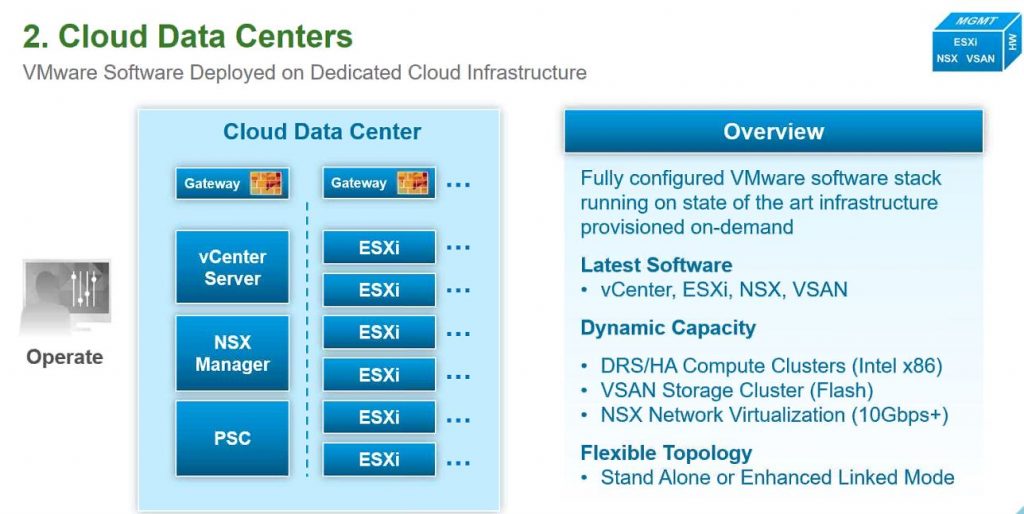 Finally the below figure illustrates how it can be deployed in any of the many worldwide AWS regions that exist today and in the future. Customers can connect to their VMware clouds using IPsec public network connections or direct connections to AWS. 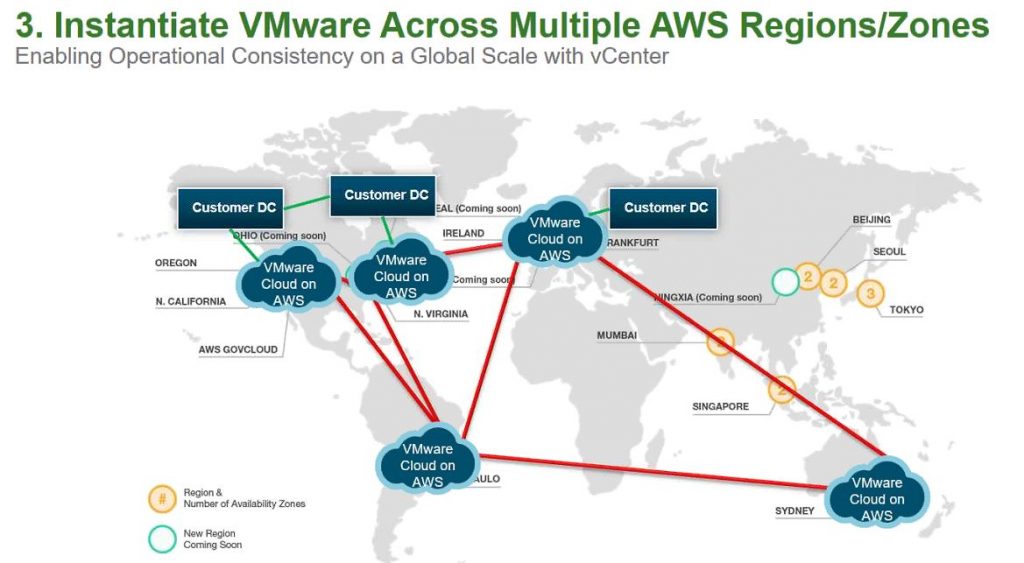 VMware’s goal with this is to eliminate boundaries between public clouds and private data centers and allow customers to more easily build hybrid cloud environments. Of course for VMware this is a win/win situation as no matter where you run vSphere you’re still a VMware customer running their software stack. As VMware only sells software they really don’t care where the hardware comes from. By design this solution provides greater flexibility and more choices for customers to run their vSphere environments in. You can find out more about this new offering at the below links: