Some Friday vHumor for you…

Interesting lawsuit against VMware regarding their use of Linux in ESXi

Has VMware jumped the shark?

VMware has been in the spotlight a lot recently in regards to some business level news about the state of the company. On one hand you see them declared one of the best companies to work for, but on the other hand you see that they are laying off people and there seems to be a leadership revolving door. In this post I wanted to give my thoughts and perspective on this news about VMware.

Before I begin I want to point out how many years ago many people were stating that VMware might be the next Novell who’s Netware product  was the dominate player in the user networking/file sharing realm. I personally worked with a lot of Netware installations back in the day. The other players in that biz were Linux and OS/2, and of course Microsoft Windows (NT/Server). The major threat to Netware was Windows and by 2000, Novell was in major decline and eventually faded into tech obscurity.

The similarities between VMware and Novell are mainly that Microsoft is the biggest threat to their business and they were both market leaders by a large margin, but that’s where the similarities end as VMware has done an excellent job adapting and evolving and not becoming a one trick pony like Novell largely was. Despite the claims that Hyper-V would eventually crush vSphere as it was embedded into Windows, that hasn’t happened and VMware still enjoys a very big slice of the hypervisor market share and I don’t see that declining very much in the future.

Let’s start with VMware being named one of the best places to work by Fortune magazine. Not sure what the process is for picking that is, VMware is listed as #40 (Google is #1), I have never worked for VMware but from what I’ve seen and heard I think that is well deserved. They seem to treat their employees the right way, have a wonderful campus and people I know genuinely seem like they love working there. It’s nice to be recognized on this list but it really doesn’t have much bearing on how successful their business is. On a side note I was actually pictured in Fortune magazine back in 1995 when they did best states to work in before they picked the best companies to work at. That’s me front and center below. 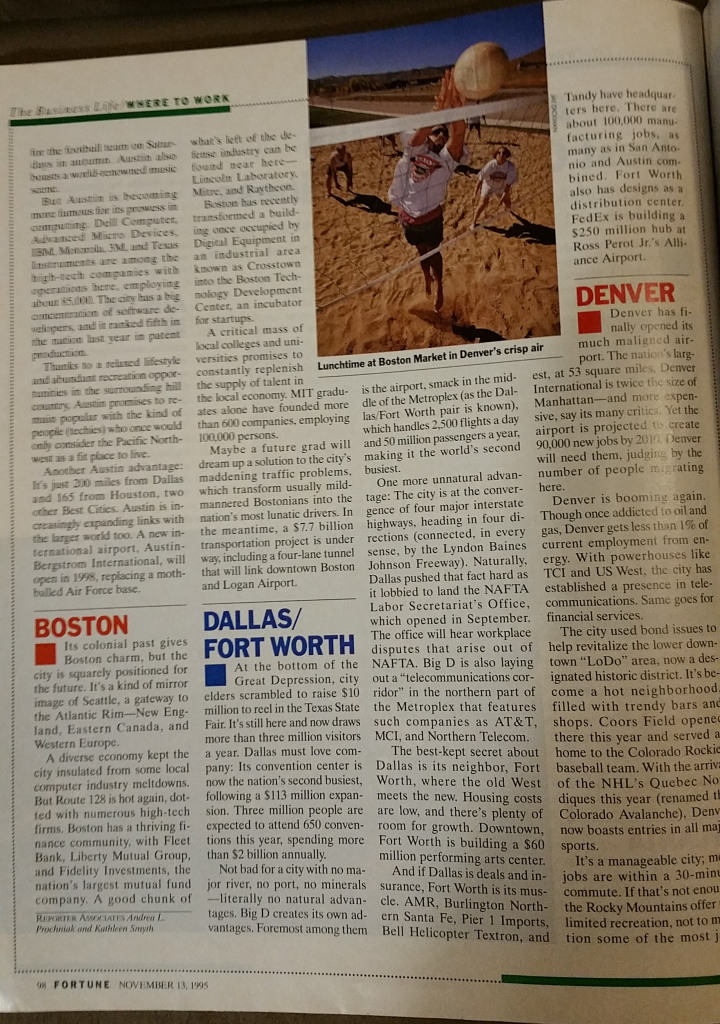 So if VMware is such a great company to work for why are so many executives abandoning ship? I’m sure they all had their own reasons but one of the biggest influences is undoubtedly the upcoming EMC-Dell merger. When companies merge or are bought out, management is usually the first thing that gets scrutinized and cut. If I was on the management team at EMC or VMware I would definitely be nervous and maybe proactively looking for greener pastures with better job security. It also doesn’t help that EMC has been a constant nagging parent to VMware which makes VMware management constantly prone to scrutiny and second guessing.

So management is a bit unstable at VMware, is that such a big deal though, what’s most important as John Troyer point’s out in his latest Tech Reckoning Dispatch is that the smart techies that are the worker bees at VMware are staying put. That’s whats most important to a company, their intellectual property, the management ladder will eventually sort itself out, the VMware ship is heading in the right direction and their are still plenty of good management types there. Personally I think the management revolving door is more FUD and less a legitimate concern. However I think VMware would of thrived a lot more had they remained a truly independent company without being owned by any other company.

So has VMware jumped the shark? Maybe, maybe not, I think their glory days are definitely over and it’s reality check and tighten the belts time at VMware. VMware recently announced their first ever large scale lay-offs, to me that’s not a big concern, it’s just them right-sizing the business as they prepare for tougher times. Microsoft still remains a legitimate threat along with other big players and of course the whole OpenStack movement has gained momentum. VMware definitely has it a lot tougher today then they did 5 years ago and one big reason for that is that almost all of their once valued technology partners are now mainly competitors to VMware. Back when VMware only sold a hypervisor product their partners built a very strong ecosystem around them which made for a powerful combination. Now that VMware has extended their line-up into just about every area including networking, storage, management, data protection, cloud, automation, etc. there is a lot more friction between VMware and it’s partners and of course competition.

VMware may have some tough days ahead of it but they have proven very resilient and will persevere and remain a dominate player. VMware is a software company, there overhead is mainly employees which is also their best asset. Once the acquisition process is over and management solidifies I think you’ll see VMware stay strong and remain focused without any chance of becoming a footnote in tech history like once dominate companies such as Novell, NetScape and Atari eventually became. Where VMware once swam in a mostly empty sea, they now swim in a sea full of sharks and only time will truly tell but my money is on VMware staying afloat and remaining strong and relevant.