Transform Storage for your Virtual Machines – vSphere Virtual Volumes* enables your external storage arrays to become VM-aware. Storage Policy-Based Management (SPBM) allows common management across storage tiers and dynamic storage class of service automation. Together they enable exact combinations of data services (such as clones and snapshots) to be instantiated more efficiently on a per VM basis.

I was very involved in the initial launch of VVols and worked closely with VMware to promote and market it. There was very little ecosystem support for VVols at launch, only 4 vendors supported it on day 1, and looking back over the years VVols has come a long way since it’s initial release.

Last year I wrote that I felt 2018 wasn’t the year of VVols for a number of reasons, this year however I feel that 2019 will be the year that VVols adoption picks up pace and we finally start to get towards seeing mainstream usage. I recently wrote an article on the HPE blog detailing the reason for this, you can go read my thoughts behind that over there. I did want to talk a bit about the dreaded “Chasm” that is typical of technology adoption and how VVols relates to that model.

I recently took a product management leadership course and they covered in detail the stages of product adoption from the early market stage where products are born and launched to the chasm stage which must be crossed before you get to the mainstream stage. The chasm represents a significant challenge for a product or technology for it to cross over from early adopters to more mainstream adoption. The representative user base for any technology product typically includes the following user types:

The chasm exists between the visionaries and pragmatists which represent a very small percentage of a user base and winning over the pragmatists are the key to the adoption of any new technology and it going mainstream. This illustration that Pete Flecha from VMware used in his VMworld session illustrates this: 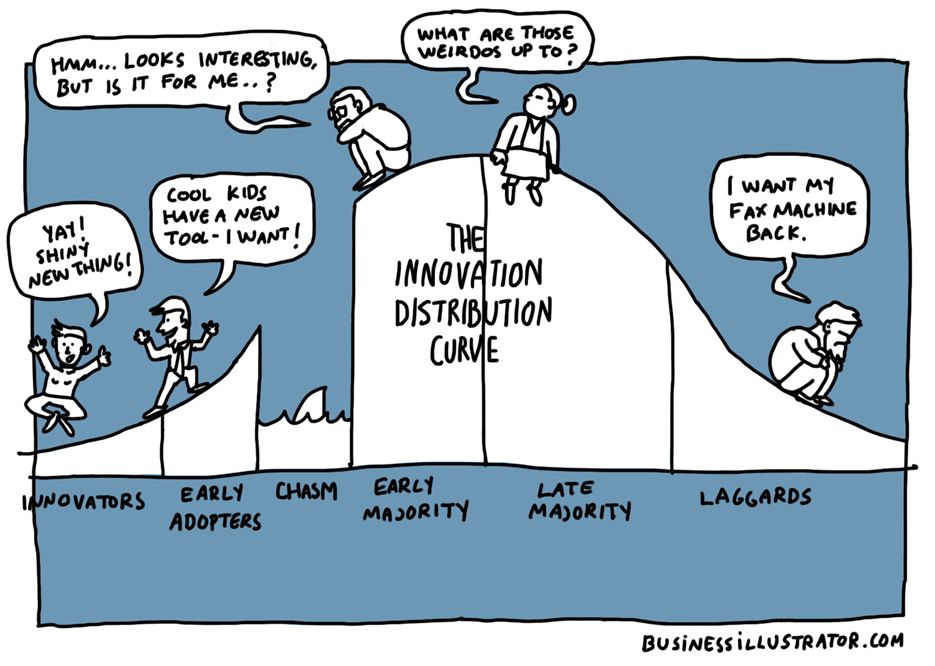 In this illustration the chasm looks fairly small and easy to cross but in reality that chasm is very wide and can represent many years to cross. The course I took highlights 2 key deliverables that a product must have to cross the chasm and win over the Pragmatists:

To date VVols has been lacking in both of these key areas. If you look around you will find very few (if any) customer case studies with VVols. I know in general it’s often very hard to find customers willing to be references and have a case study done. I did have one years ago for VVols that was translated from an Asian language that wasn’t all that great. I don’t think I have seen any other vendors that have published one and VMware has not published any that I’m aware of as well. VMware did do a customer session on VVols last year at VMworld which was good but that doesn’t apply well beyond VMworld and is not easily consumable for anyone looking for VVols case studies today.

I think what VVols desperately needs is a lot more customer references and case studies. I came across a new one internally just last week that is in development and I plan on being very active in that one. What is needed though is for all partners, particularly the ones with larger VVols user bases to identify customers and develop these, the biggest VVols partners today are HPE, Pure, EMC and NetApp. Besides that I believe if VMware itself would publish some it would greatly help all partners as VMware has a larger audience and independent credibility from its partners. For that I’m calling out Lee Caswell who offered to help us promote VVols, having a good case study or two would really help move VVols adoption forward.

On the next point of having a 100% minimum viable whole product, VVols has been largely a work in progress since it’s initial release, this includes both the deliverables from VMware and the deliverables from partners trying to build VVols solutions. I would refer to these as two completely separate products as VMware has a product to deliver for VVols and partners have their own VVols products to deliver. On the VMware side in the beginning there were limitations including compatibility issues and lack of feature support with VVols. Over the years most of those limitations have disappeared, the big one we are still waiting on is SRM support which is finally coming this year. VMware is very near to having a 100% minimum viable whole product with VVols.

On the partner side, many partners have mature VVols solutions today but there are also many that are still playing catch up as well. Scale has been an issue with most partners that have to support many thousands of LUNs with VVols, expect scale to continue to increase as vendors continually optimize their arrays to handle VVols at large scale. How close any partner is to having a 100% minimum viable whole product with VVols is entirely up to each partner, I’d argue a few vendors are very close to being there but there are others that are pretty far off.

Overall I would say VVols is definitely ready for prime time, it’s assuredly ready for use across just about every vendors platform however there may be a “but” involved with some platforms and as long as you understand and accept that “but” you won’t have any issues with VVols. By “but” I’m saying VVols works just fine and does this and this “but” it just doesn’t do this right now. An example of a “but” may be doesn’t support replication or doesn’t scale over 5,000 VVols. If that “but” doesn’t apply to your environment you have nothing to worry about, if it does you can still use VVols to the extent you can while avoiding the “but” scenario and using VMFS for whatever may require it.

The bottom line is I feel 2019 is the year where VVols adoption will accelerate at a faster pace than it has before. From a development perspective it’s in a good place right now, the core VVols product is solid, there is really nothing limiting partners from building out complete VVols solutions right now. Partners will continue to mature and enhance their VVols solutions and SRM support is coming this year. I can’t say that VVols will completely cross the chasm this year but if VMware and it’s partners collectively promote the benefits of VVols and help increase customer awareness it will go a long way towards getting there. It will really take a group effort and that includes customers as well, if you are a customer that uses VVols today please reach out to VMware and/or your storage vendor and tell us your VVols story. Together we can navigate the chasm and climb the mountain to get VVols to be mainstream where it deserves to be.