Dynamic memory allocation and memory overcommit both aim to improve memory management in virtual server infrastructures, and they even use common technologies. But they take different approaches and offer very different user experiences.

These differences — plus the fact that Hyper-V lacked dynamic memory allocation until this year — have spurred much debate among VMware and Microsoft users about the merits of each feature. In this face-off, two virtualization experts debate the pros and cons of Hyper-V Dynamic Memory and VMware memory overcommit.

Hyper-V dynamic memory allocation: A superior approach
vs.
VMware memory overcommit: Do it right to begin with

Read the full article at searchservervirtualization.com…

VMware products have come a long way since the mid-2000s. Back then, virtualization was more of a niche technology with a cult following.

Today server virtualization has become ubiquitous, and VMware products dominate the market. The company has capitalized on this success and now offers other data center platforms, tools and services. Currently, VMware is making a concerted push into the cloud-computing market with products and initiatives such as vCloud Director, VMforce and Cloud Foundry.

Recently VMware has enjoyed record growth, as demonstrated by its recent acquisitions and Q1 revenue. To trace the company’s success, let’s review its recent milestones, product launches and initiatives. We’ll start in 2004, with the first VMworld conference.

In the Beginning: VMworld 2004

The first VMworld had 1,400 attendees — which isn’t bad, but far less than the 17,000 attendees in 2010. Over the past seven years, VMworld attendance has increased dramatically, which reflects the growing popularity of virtualization (see Table 1).

The importance of a vSphere health check to VARs

Your customer’s vSphere environment may seem healthy enough at first glance, but external appearances can be deceiving. Hidden problems may lurk under the cover that can eventually cause the environment to become unhealthy.

Not all problems that can occur are obvious to VARs because virtualization is much more complicated than traditional computing environments. There are many more moving parts that can lead to more complications. Seemingly trivial things such as simple configuration settings can have a ripple effect on the environment if they aren’t set correctly. Virtualization is all about sharing a limited set of resources amongst many virtual machines (VMs) and ensuring the optimum performance and availability you need to ensure the environment stays healthy.

A vSphere environment health check is one of the most valuable services that you can offer to customers because vSphere needs constant maintenance to keep it operating efficiently and problem-free. A good health check should be done on a periodic basis and is similar to a home inspection in that it documents the environment and checks the many different vSphere components to identify any existing or potential problems that can occur. Health check results can also be used to identify potential optimization and performance improvement opportunities that VARs can turn into value-adds.

I just launched my new vBookshelf section of vSphere-land which can be found under the vInfo drop-down menu. I’ve gathered together over 30 books related to VMware and virtualization and have links and information on them. I think I’ve put together a pretty complete selection of good books that are available but if I’ve missed any please let me know. I’d also like to highlight 4 good books that have been recently released.

This one is long overdue, I had a section created on my website a year ago that correlated to a link in my book, Maximum vSphere that listed all the many free tools that would be useful to a VMware administrator. But I had forgotten about it until recently so I scoured the internet for free tools and put together a big list of them. The table currently has over 80 tools and is sortable by category, name and vendor to help you go through them. If there is anything missing be sure and let me know.

VMware security breaches should not be taken lightly, especially now that there’s a spotlight on regulatory compliance and the shift toward cloud computing.

Virtual hosts house many workloads, and if an unscrupulous individual gains unauthorized access to a host, that person can potentially compromise all of its virtual machines (VMs). That means virtualization administrators should pay special attention to preventable VMware security breaches. There are several potential weak points where VMware security breaches can occur.

Out-of-the-box, VMware vSphere is fairly secure, but you can make it more susceptible to security breaches if you’re not careful with its configuration and remote-access settings.

By default, VMware disables many features that would make administration easier, and enabling these features weakens security. In ESX, for example, administrators typically enable Web user interface. And in ESXi, many IT pros allow access to the remote console through Secure Shell (SSH) connections. These actions may make your job easier, but they open up attack vectors for unauthorized individuals.

An even bigger vulnerability is the host’s management console. It’s the door to your entire virtual infrastructure, so don’t pass out many keys. Lock up the management console tightly and use it only when absolutely needed — which typically isn’t often. Other areas of concern are VM data stores, management and storage network traffic, virtual networking, application programming interfaces, VM-host interconnects, vCenter Server roles and permissions and third-party add-ons.

The bottom line: Know your weak points and make them secure.

VSphere Client for iPad: VMware management on the go

A big feature that’s missing is performing a vMotion, which will be added later.

Read the full article at searchvmware.com along with part 2… 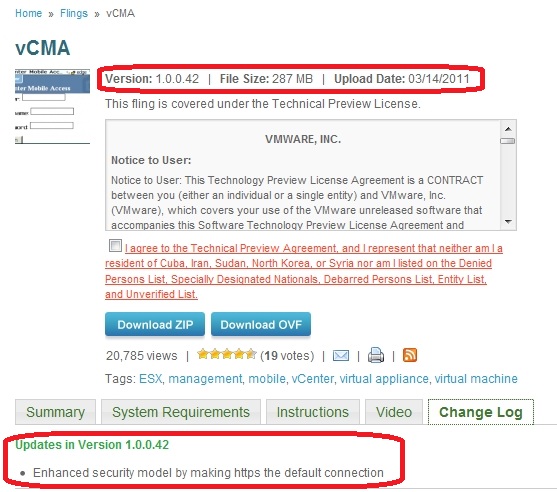