My thoughts and observations on VMworld 2017

VVols enhancements coming in the next vSphere release

I’ve known the VVols roadmap for quite a while but haven’t been able to share that publicly but VMware recently just shared it in a VMworld VVols session that is publicly available on YouTube so I though I would comment on that. If you watch the STO2446BU – VMware Virtual Volumes Technical Deep Dive replay you can find this slide near the end of that session (53:11). 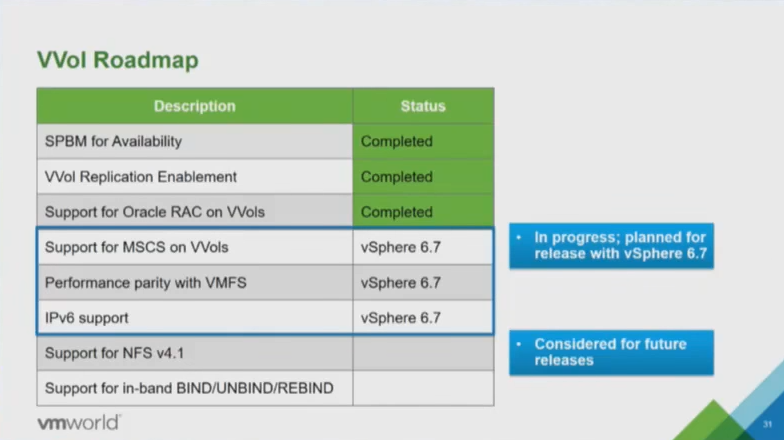 So the VVols roadmap for the next release of vSphere contains the following:

The other things you see there like NFS v4.1 support and in-band bind are being considered for other vSphere releases beyond the next vSphere release. In-band bind has been one that VMware has been trying to do for a while now, today the bind operation happens out-of-band using the control path through the VASA Provider and the goal is to bring it in-band to the data path through the Protocol Endpoint instead. This should improve the efficiency of the bind operation and eliminate a potential failure point. You can read more about this on a post I did about a year ago.

[notice]Note while you see vSphere 6.7 mentioned in the slide above, that has not been officially announced or confirmed as the version for the next vSphere release.[/notice]