With vSphere 5.5 due out sometime later this month I thought I’d look back at the VMware release cycles for new versions over the years. If you look at the number of days that it took VMware to release a new major version of ESX/ESXi you’ll see that has been steadily dropping. With increased competition and more widespread adoption of virtualization gone are the days where VMware had the luxury of time to get new product versions out the door.

With such a short release cycle of just about 1 year now it must be a grueling task for VMware to maintain that pace especially with all the interoperability and compatibility between there ever growing product portfolio that they must maintain whenever they release a new version. It also makes it challenging for vendors to keep pace with VMware and support new features & APIs as well as major architectural changes like the end-of-life of the ESX hypervisor and the classic vSphere client.

You also have to be concerned about quality with such a fast pace, overall VMware has done a fairly decent job in that area but they have been bit in the butt a few times like with the infamous time-bomb bug. VMware will most likely stick with their one year release schedule that they have settled in to as it aligns with VMworld and trying to run any faster would likely be too much for them to handle.

Also check out my complete table of all the VMware release & build information. 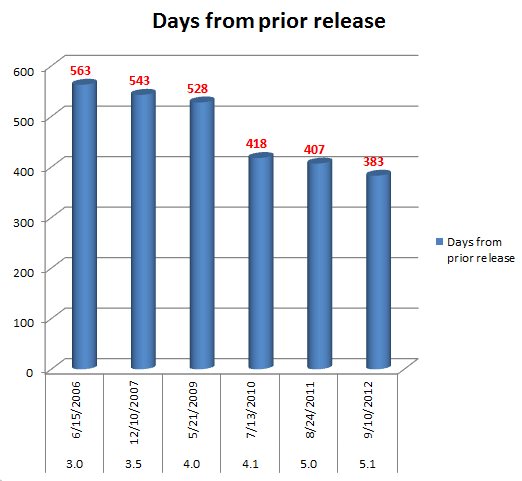