ZertoCON 2019 takeaways: a close family, Zerto 7 and a bright future

Going to HPE Discover? Come see my session on VMware & VVols and stop by our VMware demo

Last year I wrote about the Photon OS based SRM appliance that was coming in the next big SRM release to replace the traditional Windows based model and now it’s finally here as part of SRM 8.2 that was released last month. My post from last year was based on the tech preview that VMware did at VMworld of the new appliance in the SRM session. I’ve been working closely with VMware on the SRM 8.2 release as the Product Manager for our 3PAR SRA so I’ve been pretty close to the engineering work that we had to do to transition from a Windows based SRA to a Linux based SRA that is deployed within a docker container.

Beginning with SRM 8.2 you can now deploy SRM a lot easier as a virtual appliance that is based on VMware’s Photon OS, so no more Windows. There are several benefits to this including cost savings (not licensing Windows), simplicity (easier install/manageability), security (less attack vectors) and consistency (pre-built appliance). The appliance uses Photon OS which runs the SRM server application and then a Docker instance for vendor specific SRA’s as you can see in the below figure.

The specifications for SRA’s basically remains the same as their is no real functionality difference here with the only difference being mainly the packaging of the SRA. There is some new metadata requirements and entry point locations specific to commands, locations and permissions within the Docker container. The Docker images contain the vendor SRA application and all the libraries and dependencies that it needs to run on Linux.

SRM 8.2 supports both the new Photon OS based virtual appliance and the existing Windows deployment models however I’ve heard that VMware is going to be pretty aggressive about deprecating the Windows version. For Windows SRA’s in 8.2 nothing really changes, storage array vendors should have SRA’s for both models with 8.2 but the same Windows SRA’s you previously used will work with 8.2. The process to install SRA’s is basically the same, download it from either the vendor or VMware site and then upload it inside the SRM interface.

The big question for existing SRM customers is how you will migrate from an existing Windows based SRM environment to the new Photon OS. To do an in place migration your Windows based SRM environment must be upgraded to the Windows based SRM 8.2 version. The only supported SRM versions to directly upgrade to SRM 8.2 are 6.5, 6.5.1, 8.1.1 and 8.1.2. If you are running SRM 6.1.2 you must first upgrade to SRM 8.1.1 and then to SRM 8.2. If you are running an a version older then 6.1.2 you must first upgrade to 6.1.2 before going to 8.1.1. This can result in a lot of upgrades to get to 8.2, you can see the supported upgrade paths by version at the VMware Product Interoperability Matrices which is also shown below. 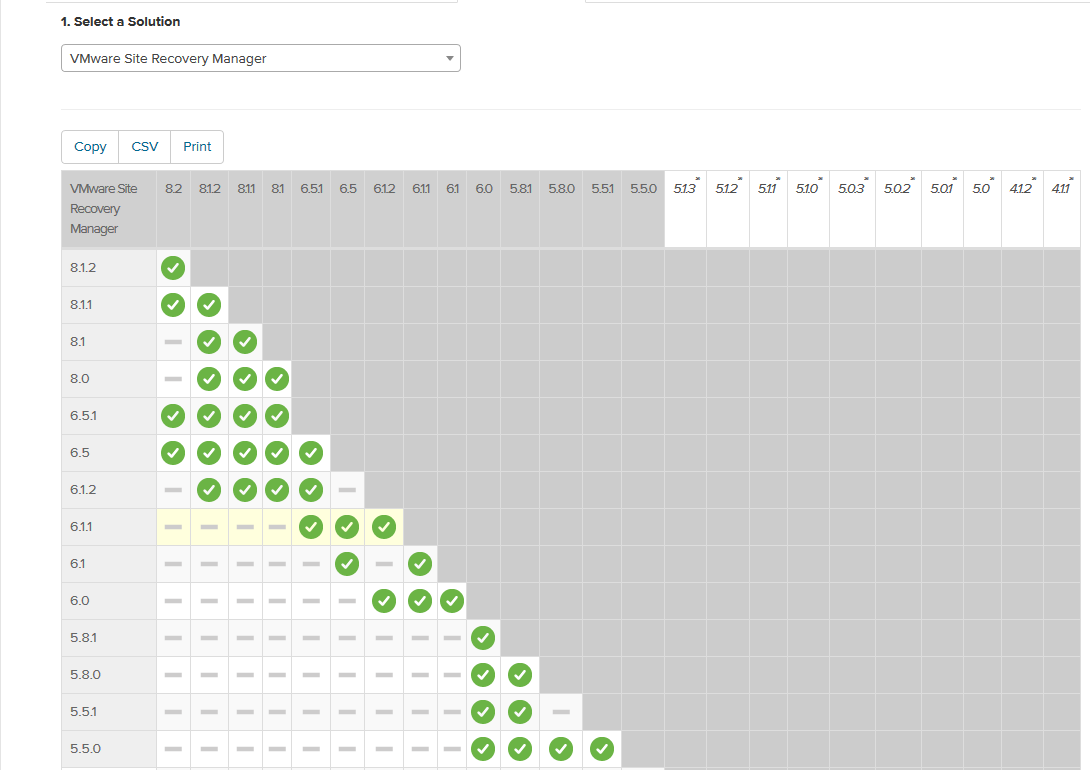 When you’re ready to upgrade read through the SRM 8.2 Installation and Configuration documentation which shows the steps once you have upgraded your Windows SRM to version 8.2. You will need to first deploy the Photon OS SRM virtual appliance and then you run some command line scripts to export your existing configuration data from Windows and then import it into the Photon OS appliance. Finally you need to install the new SRA’s and then reconnect it to the second site. You can optionally migrate back to the Windows SRM if something doesn’t work out by simply powering off the Photon OS appliance, powering back on the Windows SRM and then reconnecting to the second site.

Before you upgrade though its very important you make sure your storage vendor support the Photon OS SRA, as of right now not many vendors do. You can check this at the SRM Compatibility Guide by selecting version 8.2 and it will then show an OS type in the listings (Windows/Photon) as show below. I know HPE 3PAR & Nimble both had day 0 support for Photon and taking a quick look right now it appears only 3 other vendors support it (Dell/EMC, Pivot3 & Pure). Also remember that 8.2 support doesn’t mean Photon support unless specifically indicated. 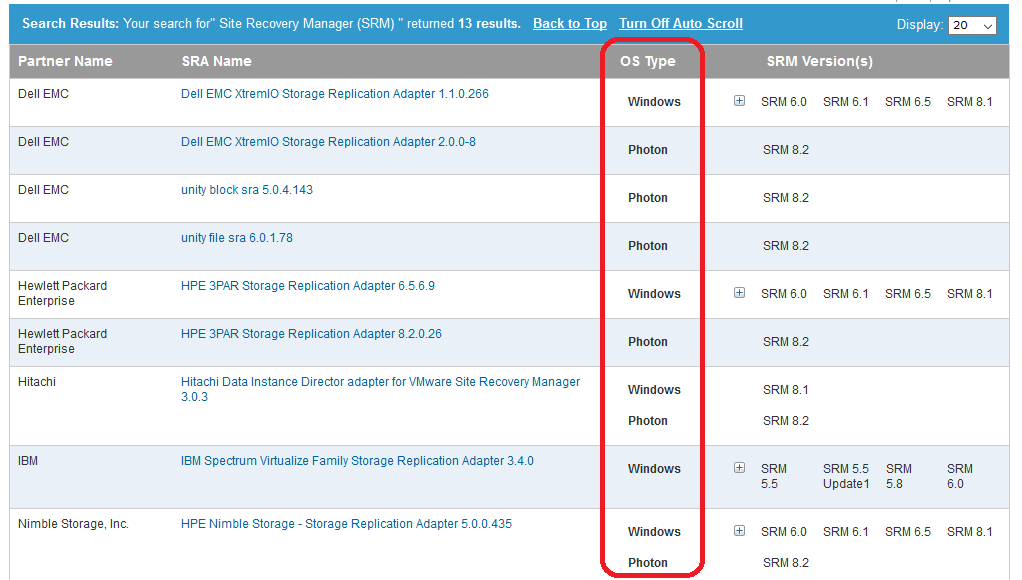 SRM 8.2 contains some additional enhancements as well which are shown below and I know VMware has worked very hard on this release as they prepare to take on VVols support next.

Below are some additional links to help get you started with the new SRM 8.2 Photon OS based virtual appliance.